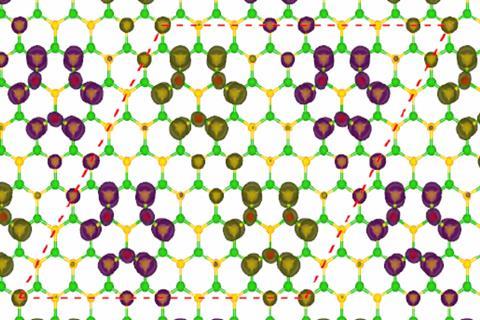 A density functional theory calculation showed the magnetic properties of a fluorinated sample of hexagonal boron nitride. This version is anti-ferromagnetic, determined by how the fluorine atoms (red) attach to the boron and nitrogen matrix

Introducing fluorine into the two-dimensional material boron nitride modifies its electronic structure and may pave the way for new applications, researchers led by Pulickel Ajayan of Rice University in Texas, US, have shown.

Boron nitride goes from being an electrical insulator to a semiconductor when it is fluorinated because the introduction of electronegative fluorine atoms reduces the material’s band gap. Ajayan and colleagues showed that around 5% fluorination is needed to lower the band gap.

Adding fluorine was also found to change the material’s magnetic properties, because of the effect of fluorine atoms on the spin of nitrogen ones. The team described this as un ‘unexpected bonus’, as magnetism is highly unusual in 2D materials with the first instance only recently reported.

The development could open up the possibility of using boron nitride for electronics or magnetic memory, perhaps in high temperature environments given the material’s excellent thermal conductivity.