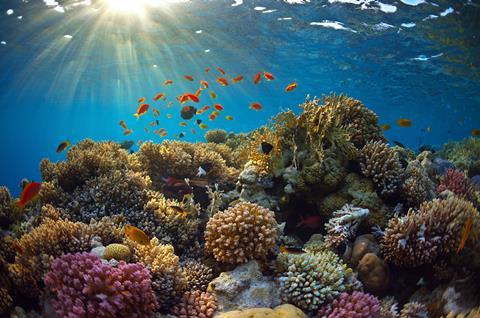 Adding crushed rocks containing magnesium and iron minerals to seawater allows it to sequester more carbon from the atmosphere, geoscientists have shown.

Oceans are the world’s most efficient carbon store. Around a quarter of all anthropogenic carbon dioxide emissions are sequestered into the sea, and oceans could take in up to 80% of manmade carbon if the process, which usually takes centuries, could be sped up.

A team led by Eric Oelkers from University College London, UK, spread finely milled peridotite – an ultramafic rock that is rich in iron – in tanks of seawater with simulated wave activity. As the powdered rock dissolved it raised the pH of the water, enabling it to react with more atmospheric CO2. The sequestered carbon mineralised into aragonite, a form of calcium carbonate, which sank to the bottom of the tanks.

If powdered peridotite was added to actual oceans, the researchers say, the aragonite would sink to the ocean floor and become sediment, storing carbon permanently. And in nature, aragonite is important for the calcification of corals, so it may even have the added bonus of supporting coral growth.

So far, the approach has only been tried in laboratory simulations. Oelkers says the method needs further scrutiny before it could be seen as a viable way to reduce atmospheric CO2.

‘With upscaling, there are many, many things to consider, some of them unexpected,’ he tells Chemistry World. For example, the extra iron in peridotite rocks could cause plankton blooms. The rocks also contain materials that are harmful to marine life, such as nickel, and it is not clear what impacts these would have on a large scale.

The energy and money required to mine and mill the peridotite also needs to be considered. The researchers propose that the method should be limited to coastal areas where peridotite is common, in order to limit carbon emissions from transport.

Juerg Matter, a geoengineer at the University of Southampton who was not involved in the research, says further refinement of the method could help lower the energy costs of peridotite powder production and save on emissions.

‘The question is really what the acceptable grain size could be,’ he says. ‘Is it really necessary to produce ultrafine particles, or could we tune the process [so] less milling time is required?’