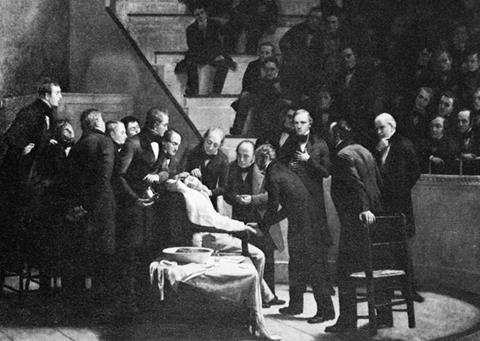 The first use of a general anaesthetic was in 1846. Pinning down how they work has proved difficult

General anaesthetics may extinguish consciousness through mysterious quantum biological effects that cause subtle changes in the electronic state of proteins, rather than through ‘conventional’ pharmacological mechanisms such as directly interfering with receptors or ion channels, new research proposes.

The work, carried out by a team led by Luca Turin of the Alexander Fleming Research Centre in Athens, Greece, could go some way towards explaining a generic mechanism of action for general anaesthetics. The team’s hypothesis would account for the extraordinarily wide range of molecules that can cause unconsciousness, from simple species such as xenon to complex multi-atom steroids.

Turin concedes that this idea is ‘completely orthogonal to the existing axes of neuroscience’, and it has duly been greeted with scepticism by some anaesthesiologists. Others, however, think the notion is not as outlandish as it may first appear.

Turin, famous among other things for proposing a controversial theory of olfaction in which the vibrational spectra of odorants are responsible for their smell, teamed up with colleague and expert in fruit fly drosophila experimentation Efthimios Skoulakis, and density functional theorist Andrew Horsfield, of Imperial College London, UK.

‘I have been interested in biological electronics for a long time and just had a sneaking feeling that there might be a connection between anaesthetics and electrons,’ Turin says.

Mixing metaphors, Turin et al are in the right ballpark, but barking up the wrong tree

The team designed an audacious experiment to measure changes in electron spin activity in whole, live fruit flies exposed to general anaesthetic. Crucially, the researchers were able to compare any response of these flies with a mutant strain of fruit flies that are resistant to the effects of general anaesthetics.

The team showed that if around 30 fruit flies are cooled to a few degrees above freezing to render them motionless, it is possible to obtain a steady electron spin resonance signal (ESR) from the population. When the flies are exposed to anaesthetic, a jump in the ESR signal is observed, compared with the resistant flies, indicating an increase in the number of unpaired electrons.

The possibility that the leap in unpaired electrons is due to the generation of free radicals is, Turin thinks, unlikely because radicals are so short-lived and would be mopped up almost instantaneously. The pigment melanin is also a potential source of unpaired electrons, but a similar result was obtained by melanin-depleted mutant strains.

Electronic spanner in the works 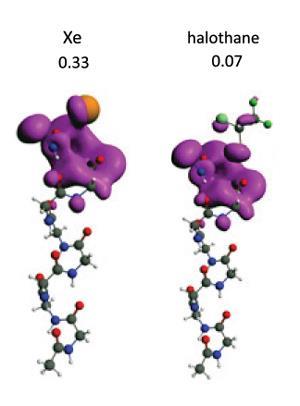 Turin suggests that the anaesthetic molecule could be lodging itself in a hydrophobic pocket of protein molecules where it withdraws electrons, perturbing electron currents within the protein. Density functional theory simulations with a model hydrophobic peptide interacting with xenon shows that this is feasible. Precisely how this perturbation might ultimately induce anaesthesia is open to speculation, Turin says. ‘What we are suggesting is that somehow the anaesthetic molecule is putting an electronic spanner in the works. We believe we have shown there is an unexpected, very surprising and so far unexplained connection between anaesthetics and electrons, measured by their spin.’

Experts, however, remain divided. Michael Perouansky, professor of anaesthesiology at the University of Wisconsin, US, says: ‘I do think that the observed effects are real, that is they do happen in drosophila exposed to general anaesthetics. A very different question is whether these effects have anything to do with the behavioural state of anaesthesia. For this, as a minimum, they would have to be observed under biologically plausible conditions, for example the normal temperature and pressure for a fly, and occur at anaesthetic concentrations that cause anaesthesia in a fly and not five or 10 times higher.’

Stuart Hameroff, director of the Center for Consciousness Studies at the University of Arizona, US, agrees that conventional approaches towards understanding anaesthesia have so far drawn a blank and that new ways of thinking are needed. ‘The type of approach taken by Turin et al, looking for anaesthetic action on overall physical effects such as intra-protein electronic activity, is increasingly important and the right path overall,’ he adds. ‘It’s the path we’ve been on for decades.’ However, Hameroff says that because the chilled flies are temporarily brain dead, ‘there’s very little electronic activity there to anaesthetise’. He adds: ‘Without any indication of what underlying electronic process is being inhibited by anaesthetics, and the possibility of a metabolic effect as the source of the ESR, we don’t think this is a valid model of anaesthetic action.’

Hameroff concludes: ‘Mixing metaphors, Turin et al are in the right ballpark, but barking up the wrong tree.’

Turin concedes that the experimental conditions are not ideal, and the team is working on ways to paralyse the flies at room temperature – it being necessary to immobilise them to obtain an ESR signal. However, Turin maintains that regardless of the shortcomings of the setup, the fact that there is a marked difference in the ESR signal between normal flies and those resistant to anaesthesia strongly suggests that something significant is occurring electronically in response to an anaesthetic.