Using clever cluster chemistry, an atomically precise gold and ruthenium cluster supported on titanium dioxide has been developed that can photocatalytically convert nitrogen into ammonia.

The Haber–Bosch process remains the go-to method for producing ammonia, but it comes at a price. As usual, natural enzymes have synthetic catalysts beat when it comes to converting nitrogen to ammonia. Nitrogenase enzymes fix nitrogen under ambient conditions. These natural catalysts are the inspiration for synthetic nitrogen photofixation catalysts, however, until now, activating nitrogen on heterogeneous transition metal photocatalysts has remained an elusive target.

Now, researchers at Nanjing Tech University, led by Yan Zhu, have synthesised Au4Ru2 clusters supported on TiO2 that perform the photocatalytic conversion of nitrogen to ammonia at room temperature and under atmospheric pressure.

Simple gold clusters are not photocatalytically active for fixing nitrogen, as nitrogen molecules simply cannot coordinate to the clusters. By incorporating ruthenium, a well-known candidate for activating nitrogen, into the cluster and supporting it on TiO2 with oxygen vacancies, researchers have synthesised a photocatalyst that produces ammonia at a rate of 44.5mmolg-1h-1. 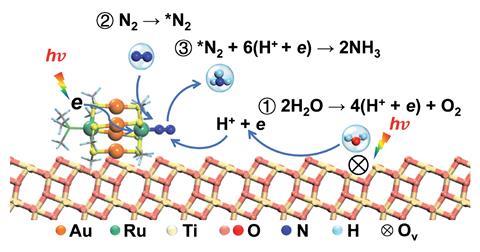 The catalyst performance hinges on its synergistic interactions. ‘A co-operative effect between the cluster and the TiO2 substrate leads to an extraordinary activity for light-driven nitrogen reduction,’ explains Zhu. The Au4Ru 2 cluster absorbs light, harvesting electrons that transfer to the ruthenium atoms. Ruthenium activates dinitrogen’s triple bond with those electrons. The TiO2 substrate plays an important role by splitting water to generate protons to fix the nitrogen. All the while, there are thiolate and triphenylphosphine ligands surrounding the cluster, preventing collapse into large nanoparticles.

Jianfang Wang, an expert in plasmonic photocatalysis at the Chinese University of Hong Kong, calls the composite cluster an ingenious idea. ‘Although the achieved ammonia production rate is not the highest among those that have been demonstrated recently, there is no doubt that it can be further improved through the rational design of the metal alloy clusters. This work also offers an opportunity for understanding the co-operative effect between the electron source and the activation site for nitrogen photofixation,’ he says.

Zhu says he expects their discovery to open a new chapter on feasible strategies for using solar energy.