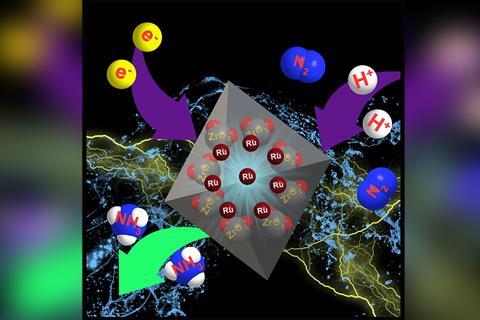 By developing a more effective ruthenium catalyst, researchers in China have improved the efficiency of electrochemical nitrogen fixation, a process that could one day replace the Haber–Bosch process as a greener way of making ammonia.

While the Haber–Bosch process is still the preferred method for producing ammonia and nitrogen-based fertilisers on an industrial scale, researchers have been exploring alternatives that don’t require such high temperatures and pressures. One approach that is potentially more sustainable is the electrochemical reduction of N2 to NH3, which renewable energy could power. But this suffers from low current-conversion efficiency, with the best electrodes and catalysts achieving around 10% efficiency at ambient temperature conditions – too low for industrial scale-up.

Now, Zhenyu Sun at Beijing University of Chemical Technology in China and colleagues have managed to improve electrochemical nitrogen fixation with clever catalyst design. Previous work had shown that single atoms of a metal catalyst dispersed on a support can be more effective than larger particles of the metal because the catalytically active sites are homogeneous and the metal can work at maximum efficiency. So Sun’s team built a single-atom catalyst for electrochemical nitrogen reduction using ruthenium – a metal that had already shown promise for the reaction – supported on nitrogen-doped porous carbon. They showed that using their catalyst with an aqueous solution of N2 could increase the current-conversion efficiency of its reduction to ammonia to 21%, far outperforming other metal-based catalysts.

They also showed that adding zirconium dioxide to their catalyst improved its specificity for nitrogen and inhibited the reduction of water to hydrogen gas, a competing reaction. This resulted in ammonia yields twice as high as that of the next best reported catalyst.

‘We believe that the development of single-atom catalysts opens a potentially alternative avenue for efficient ammonia synthesis,’ the researchers conclude, adding that the approach ‘deserves further research in N2 fixation’.

Joshua McEnaney, who works on electrochemical nitrogen reduction at Stanford University in the US, says this approach offers an ‘important path’ towards sustainably producing ammonia and fertilisers, and that Sun’s group’s work ‘taps into exciting new types of catalysts with promising NH3 selectivity’. ‘It will be interesting to see if similarly engineered sites with different core atoms or support structures can also work for this reaction, and if partial current densities toward NH3 can be improved, ‘ he says.