Record amounts of ammonia produced from nitrogen and water 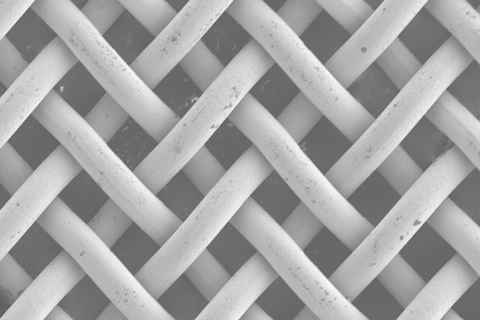 As one of the most important and energy-intensive reactions on Earth, ammonia production has long been a major target for researchers seeking to make the chemical industry more sustainable. Achieving respectable yields under mild conditions has proved extremely challenging, however. Now, after developing a gas diffusion electrode that works in organic solvents, US researchers have obtained record yields of ammonia from nitrogen and water.

The central challenge in ammonia production is breaking the dinitrogen triple bond – one of the strongest in chemistry. In solving it in the early 20th century, Fritz Haber and Carl Bosch enabled the conversion of nitrogen into a form that could fertilise crops. This approximately doubled the population that the world’s farms could feed. Unfortunately, the high temperatures and pressures needed by the Haber-Bosch process consumes huge amounts of energy. When hydrogen production – invariably from fossil fuels – is included, ammonia production is responsible for around 1.5% of global carbon emissions.

Dinitrogen’s stability has made developing a sustainable electrochemical alternative to the Haber–Bosch process much more challenging than developing alternatives to other important industrial reactions. ‘We’ve worked on producing ammonia electrochemically for the last 10 years and it is extremely difficult,’ says Ib Chorkendorff of the Technical University of Denmark, whose group has commercialised electrochemical hydrogen peroxide production. ‘We tried reproducing a lot of papers that claimed to make ammonia and they all make sub-parts per million or a few parts per million.’

One promising route uses lithium and nitrogen to form lithium nitride spontaneously under ambient conditions. If this is then protonated to make a lithium salt, the resulting salt can be electrochemically reduced back to the metal. This process has been demonstrated in batch production setups, but these would be unsuitable for an industrial chemical plant. 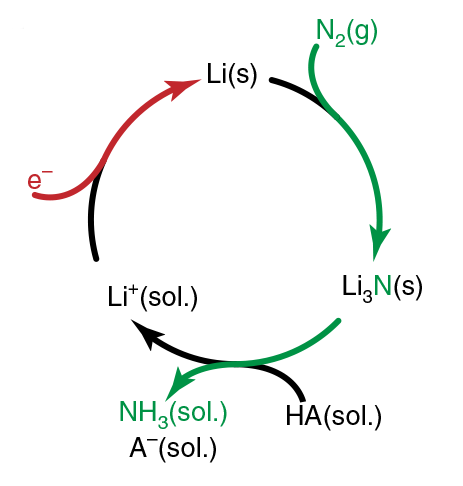 Now, chemical engineer Karthish Manthiram and colleagues at the Massachusetts Institute of Technology have developed an electrochemical cell comprising two gas diffusion electrodes separated by ethanol dissolved in tetrahydrofuran. They continuously pumped streams of nitrogen gas past both the anode and cathode. At the cathode, ethanol is consumed to form ethoxide and in the process dinitrogen is reduced to ammonia. At the anode, hydrogen molecules were oxidised to produce protons, and in the process ethoxide is regenerated to ethanol.

‘We’re forming lithium metal at the cathode in this experiment,’ explains Manthiram. ‘That would react with water very quickly.’ Consequently, the researchers had to avoid working with aqueous solvents and therefore needed to design a new gas diffusion electrode comprising a platinum catalyst-coated stainless steel cloth. They then coupled their setup to a commercially available water-splitting device to provide a renewable source of hydrogen. Overall, they produced ammonia at a record rate for such a setup, even though their energy efficiency was only 1.4–2.8% due to the large over-potential required. ‘There’s still a lot more work to do,’ admits Manthiram.

‘This work is significant because the researchers have shown a sort of fuel cell setup in which you can increase the conversion of nitrogen to ammonia,’ says Chorkendorff. ‘If I were to find a hair in the soup I would point out that the highest data they report for Faradaic efficiency are only within the first 10 minutes, and in an hour it’s half that. But using membranes and gas diffusion layers in non-aqueous electrolytes – that’s something new.’

Correction: The electrochemical details of the story were updated on 7 May 2020.