Chemists have long believed that the great strength of the nitrogen–nitrogen triple bond was the main reason for its inertness. However, new research shows that π bonds between nitrogen atoms don’t contribute as much to the stability of dinitrogen as previously thought. 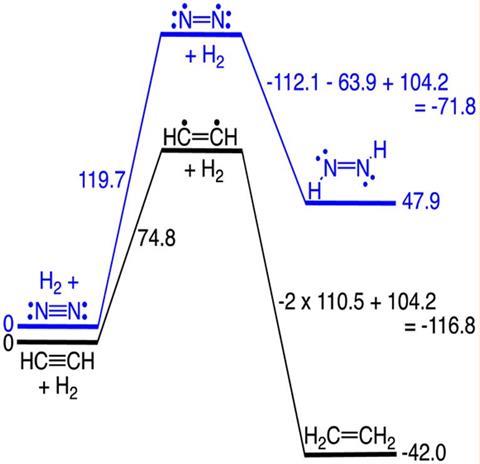 Enthalpy diagram for addition reactions to dinitrogen and acetylene. It takes considerably more energy to hydrogenate molecular nitrogen than it does acetylene

These findings don’t come from new experiments but from carefully analysing existing data. Weston Borden, a researcher at the University of North Texas in the US, scrutinised several thermochemical tables and compared the addition of hydrogen to acetylene and dinitrogen, two isoelectronic molecules. Although they look very similar on paper, both reactions are thermodynamically divergent. The hydrogenation of acetylene is highly exothermic, while adding hydrogen to dinitrogen takes a lot of energy and is endothermic. The process is so demanding that producing ammonia for fertilisers consumes around 2% of the energy generated globally.

The explanation for this phenomenon centres on single sigma bonds and not on multiple bonds, Borden finds. When triple bonds are hydrogenated, one π bond is broken, but two new sigma bonds are formed. The new C–H bonds happen to be far stronger than the N­–H bonds, and these differences contribute more than 50% of the thermodynamic disparity between the two reactions. Thus, the strength of nitrogen–nitrogen π bonds may not be the main explanation for dinitrogen’s stability.

These discoveries could change the way we tackle the breakdown of dinitrogen, one of the most important chemical processes in the world. It is also hoped that they will help chemists to develop better catalysts for more efficient nitrogen fixation.