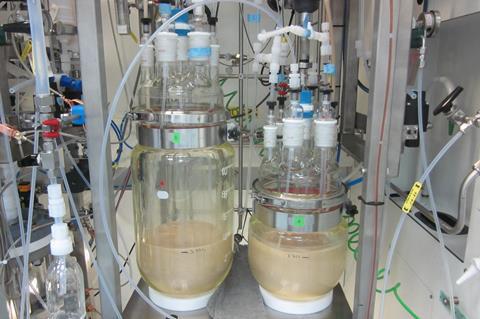 Continuous crystallisation, shown here, and subsequent filtration have been the most difficult-to-develop part of the prexasertib production process

Continuous processing relies on chemical and physical changes happening as substances flow through pipes. Isolated steps of this type are already well-established in the pharmaceutical industry. However, Lilly ‎principal research scientist Kevin Cole stresses that a series including reaction and purification steps like this has not been demonstrated before. And the company wants to go much further.

‘We envision entire synthetic routes consisting of many reaction and separation unit operations being executed simultaneously in flow, with heavy reliance on design space understanding, process analytical technologies and process modelling to ensure quality,’ Cole says. ‘We think this will drastically change the environment for pharmaceutical manufacturing.’ 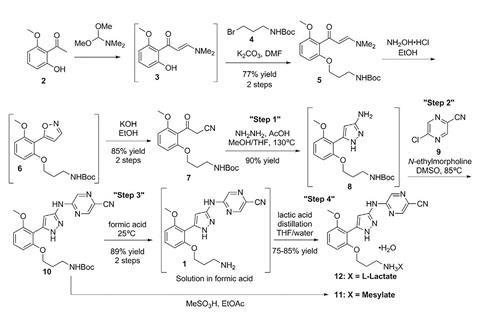 The complex synthesis of prexasertib even requires the use of toxic hydrazine – used as a rocket fuel. As a result, and because of prexasertib’s toxicity, the drug was a good candidate to test out a comprehensive flow chemistry setup

In batch processes different chemical reaction and purification steps are typically done in large, costly vessels. However, this can be uneconomical when small amounts of drug molecules are needed for early stage clinical trials and, because drugs are getting more potent, increasingly in mainstream production.

By contrast, small volume continuous flow processing runs in more compact equipment in fume hoods. Flow systems can adapt to different processes, with cheap parts that can either be dedicated to specific drugs or readily replaced. The US Food and Drug Administration (FDA) has also been promoting continuous manufacturing because it integrates well with advanced process analytical technology. This helps pharmaceutical companies make high quality drugs with less FDA oversight.

Lilly chose prexasertib as its test case for such a process because it’s challenging to make. It is a chain of three aromatic rings, and one challenge comes because its central ring is formed using hydrazine. Hydrazine is used as a component in rocket fuel, and is also highly toxic. A second challenge comes from prexasertib itself, which, as a potent kinase inhibitor, is toxic to healthy cells, as well as cancerous ones, even at low doses. Lilly therefore wants to minimise its workers’ exposure.

Cole and his colleagues at Lilly’s labs in Indianapolis, US, have developed flow processes for three of the seven steps involved in prexasertib production. They start with the hydrazine step, which they could safely speed up by super-heating in the continuous process. After aqueous workup purification the solution of the two-ring intermediate solution runs into a ‘surge tank’. From there the solution flows intermittently into a rotary evaporator that removes solvents to concentrate it.

The second continuous flow step adds the third of prexasertib’s rings. In this case, the Lilly team purified the intermediate by crystallising it and filtering it out, washing away impurities. They could then redissolve the pure intermediate in formic acid, which also removes a protecting group, giving the desired prexasertib molecule. Automating this was probably the hardest part, Cole says. ‘Development of a predictive filtration model, equipment design and identification of formic acid as the solvent were keys to success,’ he explains. The final flow step then starts converting prexasertib to its final lactate salt form. 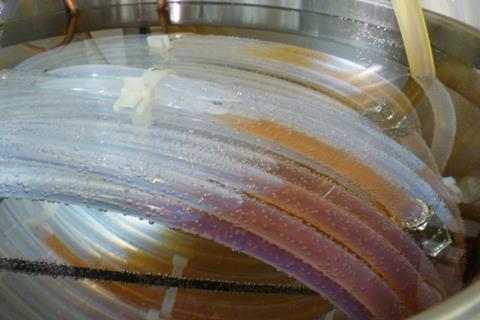 After developing the processes and systems in Indianapolis, Lilly shipped them to be equipped in an existing facility at its Kinsale manufacturing site at the cost of €1 million (£870,000). Once the prexasertib system was installed, the company was able to make 3kg of raw material per day for clinical trials. Cole describes the level of manual intervention needed as ‘moderate’.

Klavs Jensen from the Massachusetts Institute of Technology calls the paper describing the work ‘terrific’. ‘This work marks an important milestone in the continuous manufacturing of pharmaceuticals by demonstrating the feasibility of producing a modern kinase inhibitor under CGMP conditions,’ he says.

Likewise, Brahim Benyahia from Loughborough University, UK, calls this achievement ‘very interesting’. ‘The paper is another example that demonstrates the benefits and feasibility of the integrated continuous approach in pharma,’ he says.

Cole adds that Lilly has several other similar projects in advanced stages of development intended for the €35 million small-volume continuous plant it recently built in Kinsale. ‘We are committed to continuous manufacturing as well as full utilisation of our new facility,’ he says.

Correction: This article was updated on 16 June 2017 to clarify the chronology of the completion of the Kinsale, Ireland plant