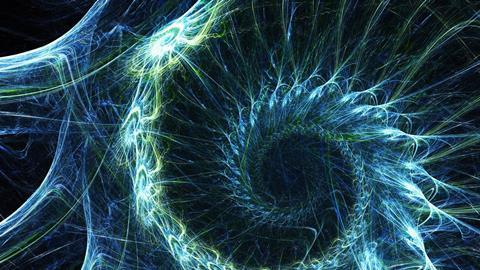 Structurally, chiral molecules are like our hands. Each hand, or enantiomer of a chiral molecule, contains the same components, but the two structures cannot be superimposed upon each other. This difference in physical structure influences the design and control of biological systems. For example, natural proteins and nucleic acids only contain building blocks of the same chirality, and often only one enantiomer of a chiral drug is active in a cell.

To determine how chirality affects molecular recognition, computer models calculate forces generated from the interactions of the 3D structure of each molecule. But another, more subtle, force could also be involved: spin polarisation generated by molecular charge polarisation. The concept of chirality inducing selective spin polarisation faces some skepticism among chemists, says Vladimiro Mujica, at Arizona State University, who was not involved with this study. But there is increasing evidence that it exists. Scientists have directly measured the strength of the spin polarisation for electrons injected into a monolayer of chiral molecules, as well as those zipping between a chiral tip of a scanning tunnelling microscope and a chiral surface. 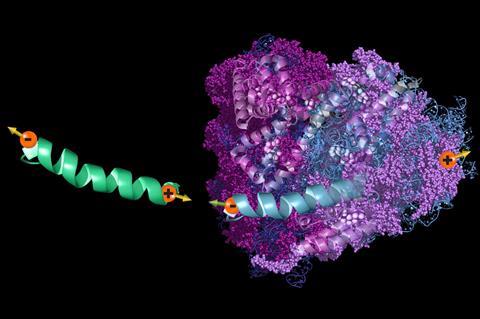 A chiral helical peptide (green) interacts with a portion of a protein with the same chirality (blue helix). As the two helices approach each other, their electron clouds distort, generating a charge polarisation and inducing a spin polarisation (red balls and arrows) that allows the helices to move close together

Instead of using voltage to push electrons through chiral molecules, Ron Naaman, at the Weizmann Institute of Science, Israel, and his colleagues wondered if charge polarisation induced more gently, using an external electric field, would also generate spin polarisation in chiral molecules. Molecules polarised in an external electric field resemble the distortion of electron clouds when two molecules move close together.

To place molecules in an electric field, the researchers first assembled a monolayer of a chiral peptide between two electrodes. Next, they applied an electric field through the monolayer to polarise charges in the peptides. When the charge polarisation induced spin polarisation, spins at the end of the peptides entered the bottom electrode, deflecting charges in the center of the electrode toward the sides, just as an external magnetic field would. These deflected charges generated an electrical potential perpendicular to the applied field. When the researchers passed an electric field through a monolayer of peptides made with L-amino acids, the generated potential was opposite to that generated when the surface was covered with a D-peptide, because molecular chirality generated opposite spin polarisations.

Next, the researchers modelled the charge polarisation resulting from bringing the electron clouds of two chiral molecules near each other. They designed a molecule so only spin polarisation contributed to the strength of the energy as it interacted with itself. For molecules of opposite chirality, the interaction energy was greater, and thus more repulsive, than for molecules of identical chirality, even if the interacting groups had no chirality. Forces from spin polarisation allow molecules with the same chirality to get closer to each other than molecules of opposite chirality, suggesting that chiral molecular recognition could involve more than physical structure, Naaman says.

This work provides a way to think about molecular recognition in a way that has been completely ignored, Mujica says. Even though spin polarisation in chiral molecules is a subtle and short-lived effect, it could be important for biological systems and have intriguing effects in NMR, he adds.