A few years back, chemists put a ring around carbon nanotubes, mimicking molecular machines.1 Now, the same team that designed mechanically interlocked carbon nanotubes has discovered that the rings in these structures can move freely.2 These results support the idea that the laws of friction may have a molecular origin.

‘Since we first synthesised mechanically interlocked carbon nanotubes we have been wondering how macrocycles behave around the nanotube,’ explains Emilio Pérez from IMDEA Nanocience, Spain, who co-led the study with Manuel Melle-Franco from CICECO in Portugal. However, they were unable to observe these systems directly. State-of-the-art microscopy may interfere with the samples – ‘electron beams can even break our macrocycles,’ explains Pérez – making it hard to determine whether movement is spontaneous or provoked.

Instead, the researchers envisioned a computational approach. They tailored molecular dynamics force field models for the mechanically interlocked structures and then carried out a series of simulations. ‘We observed that, in just five nanoseconds, macrocycles slide along a 50Å carbon nanotube,’ says Pérez. ‘Besides, the rings swirl around the tube – like our planet they rotate and revolve.’ To demonstrate this pirouetting behaviour, Pérez and his team decorated the nanotubes with dummy atoms, which served as a reference to calculate the rotation angles. ‘Over the same five nanoseconds, the macrocycles circle 1.56 times,’ he adds. 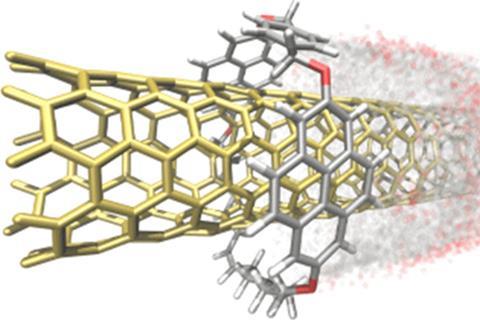 Macrocycles in mechanically interlocked carbon nanotubes rotate and translate freely around and along single-walled carbon nanotubes at room temperature, with an energetic cost lower than that for the rotation around the C–C bond in ethane

The activation energy for these movements is extremely low – suggesting the motion is almost frictionless. ‘It is a surprise that the energy barrier is lower than the rotation of the carbon–carbon bond,’ says Radha Boya, an expert in nanoscale materials at the University of Manchester, UK. The energy minima for moving macrocycles resemble the stacking interactions between graphite layers. ‘[This] hints at further applicability in the design of molecular motors,’ she adds. In the future, researchers could tune the molecular structure of mechanically interlocked carbon nanotubes and hence tailor the position of energy minima. ‘Like designing stations along the carbon nanotube rail, where the macrocycle train can stop,’ explains Boya. Pérez says that designing molecular machines using nanotubes will require further computational studies and gargantuan synthetic efforts.

The findings reinforce previous suspicions that macroscopic friction origins in the atomic scale. ‘Amontons’ laws say the force of friction does not depend on the contact area,’ says Pérez. ‘Our experiments suggest the smooth interactions between molecular systems may explain this phenomenon.’ Furthermore, this lack of friction resembles superlubricity – an effect previously observed for graphene on gold surfaces, among other materials. Eventually, superlubricity could find applications to minimise moving parts’ wear in devices such as wind turbines or hard drives.