Macrocyle aromaticity switch is all about that base

Researchers have discovered a macrocyle that they can render aromatic, non-aromatic or anti-aromatic by altering the amount of base they add. 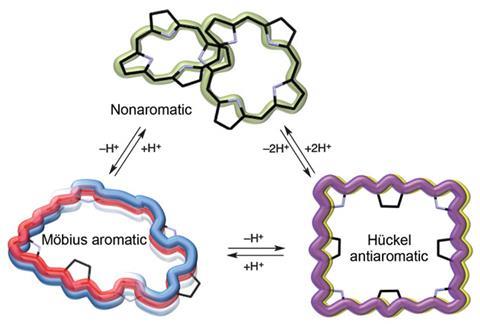 Meso-aryl expanded porphyrins are usually exceedingly twisted structures due to strong hydrogen bonds within them. Even though they contain many conjugated bonds, this twisted structure means that most of these porphyrins are non-aromatic (to be aromatic, a molecule not only needs conjugation, but must also be flat). Previously scientists had added hydrogen ions to disturb hydrogen bonding in porphyrins, causing them to untwist and become aromatic. Here, a team led by Dongho Kim from Yonsei University, Korea, have flattened a porphyrin by removing hydrogen ions.

Deprotonating with tetrabutylammonium fluoride (TBAF) transforms the 3D figure-of-eight structure of [36]octaphyrin first into a Möbius aromatic form with a half-twist and single negative charge, and then into a square planar form with two negative charges. These two negative charges repel and the molecule unfolds. Although the new structure is flat, this molecule is actually Hückel anti-aromatic, as the number of conjugation electrons is now a multiple of four, [4n], instead of the [4n+2] electrons for Hückel aromaticity.