Scientists in Japan have established a way to drive Suzuki–Miyaura cross-coupling reactions with ball milling mechanochemistry. The scalable method works on a broad range of substrates and provides a way to connect poorly soluble substrates to make complex polyaromatic hydrocarbons in an environmentally friendly way.

Suzuki reactions traditionally couple boronic acid and an organohalide via a carbon–carbon single bond using a palladium complex, and won Akira Suzuki the Nobel Prize in Chemistry in 2010. Nowadays, the reaction is widely used to synthesise conjugated systems such as poly-olefins, styrenes and substituted biphenyls for applications in pharmaceuticals and complex natural products.

This sort of cross-coupling is employed on an industrial scale and produces large volumes of waste solvent that can be difficult and expensive to dispose of safely. As such, solvent-free cross-coupling reactions have attracted attention as sustainable alternatives.

‘Previous mechanochemical coupling reactions focused on reactions between liquid substrates. But our studies only use solid substrates,’ explains Koji Kubota who led the research with Hajime Ito at Hokkaido University. Their new protocol presents a catalytic palladium system capable of facilitating cross-coupling between organoborons and aryl chlorides, where ball milling applies mechanical force to mediate the chemical reaction, rather than a solvent. Crucially, this approach can be applied to a variety of different substrates, meaning that the scope of the reaction is much broader than traditional methods limited to the use of electron-deficient aryl halides.

‘In addition to the operational simplicity and green aspect of the protocol, our research will open a new direction for developing new catalysts for solid-state cross-coupling reactions,’ says Kubota. 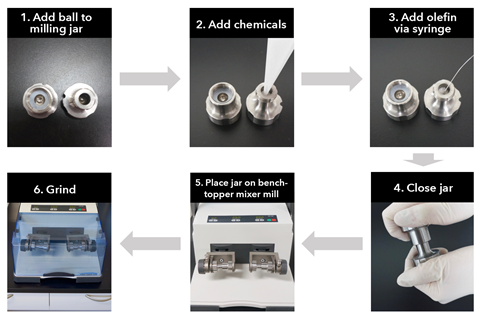 How to ball mill a Suzuki reaction

Palladium catalysts tend to aggregate and deactivate when applied to solid-state reaction mixtures. The Hokkaido team overcame this problem by adding olefin additives to disperse their catalyst.

Duncan Browne, an organic chemist at Cardiff University, UK, who has employed ball milling with both the Reformatsky reaction and Buchwald–Hartwig amination, is particularly impressed by the efficacy of the catalyst. ‘I find it surprising that, in the absence of solvent, 3mol% of catalyst is enough to obtain the products in high yield, and that the catalyst is capable of moving, mixing and turning-over the reactants and reagents within 99 minutes. The olefin additive is facilitating [this] and is an interesting line of enquiry.’

‘We are currently working on new catalyst designs for mechanochemical cross-coupling reactions with unique reactivity and selectivity that cannot be realised in solution-based protocols,’ adds Kubota. ‘Cheaper catalysts such as iron and nickel for solid-state cross-couplings are another target.’