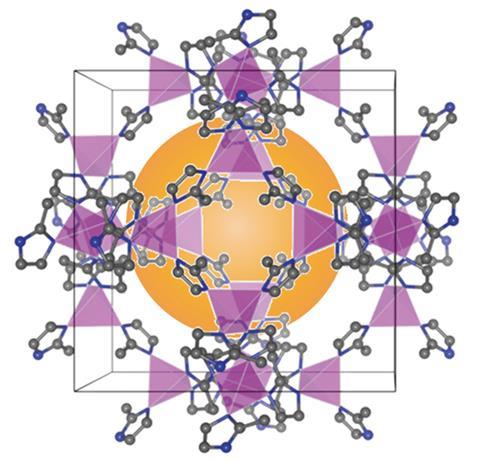 The zeolitic imidazolate framework ZIF-8, used in catalysis and gas separation, can be made into a meltable glass by combining it with an ionic liquid

However, some MOFs – usually the ones with higher porosity – are hard to liquefy, explains Wondraczek. ‘These materials undergo thermal decomposition… or never reach the viscosity needed for glass processing. It’s a consequence of their large internal surface, which destabilises the material.’

The team found that adding certain ionic liquids stabilises the material’s surface. ‘We manually mixed the ionic liquid with the MOF powder until getting a slurry,’ says Wondraczek. ‘Luckily, some of these blends successfully melted.’ They demonstrated the approach with ZIF-8, a zeolitic imidazolate framework used that can catalyse, for example, Friedel–Crafts reactions. Interactions between the ionic liquid and the MOF linkers hold the structure together during phase transition.

‘The mixture of ionic liquid and ZIF-8 has a lower melting point than [ZIF-8’s] decomposition temperature,’ explains Shuhei Furukawa, a MOF expert from Kyoto University, Japan. ‘This leads to the formation of a MOF glass by quenching.’ MOF glasses’ properties can differ from standalone frameworks, according to Furukawa. ‘[They are] a new family of glassy materials… [with] an ideally infinite number of combinations between metal ions and organic molecules,’ he says.

But the chemical interactions between the ionic liquid and the MOF haven’t been fully deciphered yet. ‘We observed some undesired partial decomposition,’ says Wondraczek. While this is easily removed by cleaning the glass with acetone, it’s unclear why it happens. Understanding the mixing and melting processes could also feed computational models that help predict the most suitable ionic liquids to melt different MOFs.

‘This is a really exciting development for the field of MOF glasses’, says Bennett. ‘Metallic glasses were… considered of poor applicability when first discovered, yet now used in a variety of settings’, such as for electric transformers and anti-theft tags. Processed into different shapes, meltable MOFs could find uses in separation membranes without compromising the material with additives. The ionic liquid-infused MOF shows good porosity and better adsorption capabilities than other MOF glasses. Other applications could include display and haptic technologies, comments Bennett.