Scientists in Canada have shown that snow acts as a sink for nanosized particles and certain organic constituents from car exhausts. 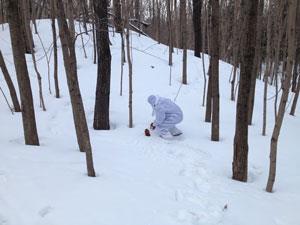 Snow for the experiment was collected from a park in Montreal, where it snows for around 5 months of the year

Air pollution is recognised as a leading environmental driver of cancer deaths, which makes the fate of these toxic and carcinogenic aerosols from car exhausts important for informing changes in emissions and air quality regulations, and technologies, in countries with cold winters.

By using a snow chamber to decouple the effects of exhaust emissions from those of other interfering pollution sources, McGill University’s Parisa Ariya and colleagues have tested how freezing temperatures and snow affect exhaust-derived particles and organic pollutants. The team measured total organic carbon and levels of typical toxic exhaust constituents, like benzene, toluene, ethylbenzene and xylenes, in the snowpack, and found that their concentrations increased dramatically after one hour of exposure to exhaust fumes. The reason being that when particles exit an exhaust’s cooler system into a colder environment like snow, the temperature gradient means that aerosols are removed by the colder surface.

Anna Lea Rantalainen, an environmental chemist at the University of Helsinki, Finland, says the work raises further questions: ‘It seems that snow is efficient at removing aerosol particles from the air, but what happens after the snow has melted?’ If the sink is temporary, pollutant emissions could increase rapidly in industrialised areas when snow melts. ‘This is not just important for Canada, but other industrial regions like China that emit very diverse compounds, which are subject to transport around the globe,’ cautions Ariya.

Also commenting on the work, Thorsten Bartels-Rausch, a surface chemist at the Paul Scherrer Institute in Switzerland, says that the study points to the need for long-term lab and field studies: ‘This research shows what should be done to a broader audience than just the cryosphere community. Long term projects would show how exhaust gases and aerosols are taken up, to see how this changes with temperature or with the age and type of snow’.

Bartels-Rausch goes on to add: ‘It shows that we need policy makers to consider cold temperatures and snow in future regulations, but we still don’t know how.’