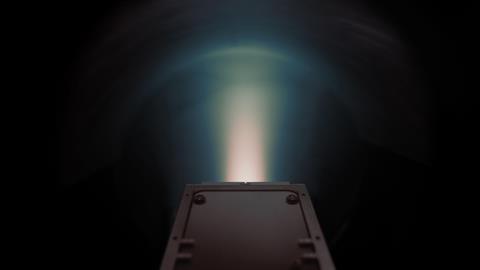 Iodine could one day propel and position constellations of mini-satellites following the first test of an iodine-based thruster in space. The system offers a cheaper, more versatile and more efficient propellant solution for manoeuvring satellites than existing electric thruster technologies, which largely rely on xenon. 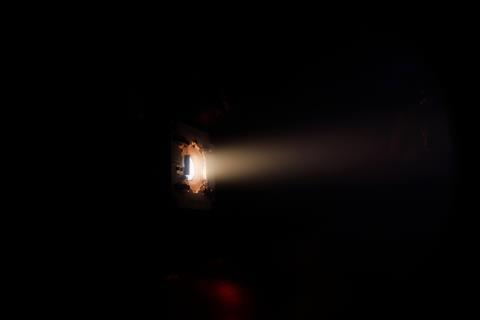 ‘Iodine is a game-changing propellant and our results show for the first time that it is not only a viable replacement for xenon, but that it also gives enhanced performance,’ says Trevor Lafleur, principal engineer at ThrustMe, the French company behind the technology.

Ion drives tend to be used on small satellites because they have a very high fuel efficiency. They usually use solar power to electrically accelerate the ions of a propellant gas in order to move, change orbit and avoid collisions. Xenon has been the dominant propellant of choice in such systems because of its relatively high atomic mass (131) – a necessity in order to produce a high power-to-thrust ratio. Xenon is also suitable because it ionises quickly, which limits power losses during plasma generation. Moreover, it is an inert gas with very low chemical reactivity and toxicity.

However, there is a growing trend in the space industry towards ever smaller satellites that form networks, or constellations, of satellites. The scarcity and expense of xenon has prompted fears that future demand could cause considerable price fluctuations and supply problems.

There are also concerns of more in-orbit collisions and space debris if satellites are launched into space with no propulsion capabilities. Some estimates suggest as many as 24,000 satellites will be launched in the next 10 years. ‘Many small satellites have little or no propulsion at present because of difficulties related to the storage of gaseous propellants like xenon,’ says Lafleur.

‘Ion thrusters were, until the last five years, used less and therefore xenon could be used with its scarcity being less of a problem,’ says Charlie Ryan who develops small spacecraft propulsion systems at the University of Southampton, UK. But the rapid growth of the space industry means xenon use is becoming unsustainable.

For around 20 years, researchers have explored using iodine – which also has a high atomic mass at 127 – as an alternative propellant. Iodine is much more abundant and cheaper than xenon and has three times the density of xenon, even when the gas is pressurised. Moreover, since iodine is a solid at room temperature, it doesn’t pose an explosion risk or need heavy high-pressure storage tanks, promising simpler and miniaturised iodine-based systems. 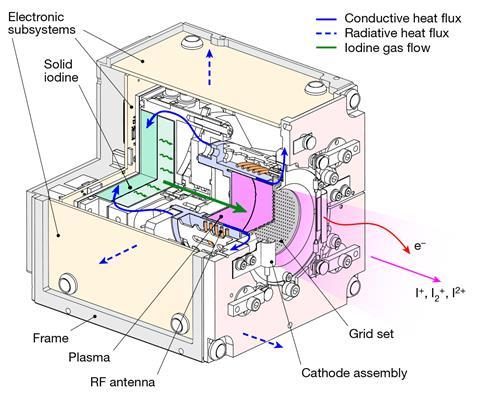 Solid iodine (darker green region) is located in a storage tank upstream of the plasma source tube (blue region). Heating causes sublimation and a low-pressure gas (lighter green region) enters the source tube (green arrow). A plasma (purple region) is created by a RF antenna, and iodine ions (I+, I2+ and I2+) are accelerated by a set of grids. A cathode emits electrons (e−) to neutralise the ion beam. Waste heat is conducted towards the iodine tank and structural frame (solid blue arrows) or radiated away (blue dashed arrows)

However, it had only been tested on the ground up until now because of various engineering challenges. One is that it corrodes its storage containers. Another is that solid iodine needs to first be sublimated in the harsh environment of space to produce the necessary gas for the propellant. It also has more complex plasma chemistry than xenon and many of its physical properties are not well understood.

‘Others have developed similar systems, but ThrustMe are the first to solve the engineering challenges of using this difficult to handle propellant and test it in space,’ explains Ryan. ‘It also has significant storage advantages, making it an ideal choice for small satellite propulsion.’

ThrustMe’s electric thruster works by first turning solid iodine into a gas by heating it with just 1 watt of power. The gas then flows into a chamber where it is bombarded by electrons that are produced when a current is applied to a radio frequency antenna. The resulting electromagnetic field accelerates the electrons so that when a collision with an iodine gas molecule occurs, two electrons and a positively charged iodine ion are produced, creating a plasma.

The positive ions are then extracted from the plasma and accelerated to very high speeds towards an exhaust and this produces thrust. To prevent the propulsion system and spacecraft from charging up, excess electrons are ejected into the exhaust plume.

ThrustMe launched its system into orbit as part of a Chinese aircraft-tracking satellite in November 2020. It successfully fired the thruster for the first time at the end of December 2020, followed by several more test firings over subsequent months. ‘We were very excited when we knew the propulsion system was operating correctly and we were seeing the first results of an iodine electric propulsion system in space,’ says Lafleur.

‘This is an exciting result,’ says Benjamin Jorns who develops electric propulsion at the University of Michigan, US. ‘The authors have shown that many of the known technical issues – reductions in performance and challenges with flow delivery – can be solved.’

‘I expect this will have a big impact on the small satellite industry. Providers are always looking for technologies like these that can be economical and safe for their spacecraft,’ says Jorns. ‘With that said, one of the interesting challenges for the near term will be to see if the performance metrics from a low power system like this will be sufficiently high to satisfy the mission requirements for spacecraft providers.’