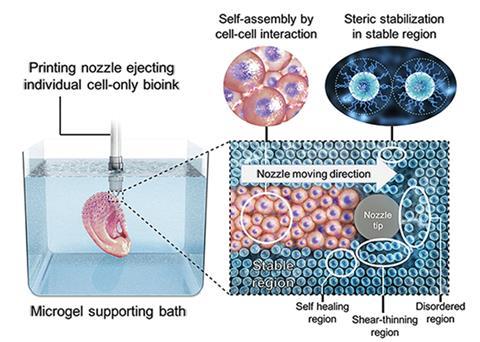 Scaffold bioprinting, as the name suggests, involves depositing cells onto a temporary biodegradable template when fabricating tissue in the lab. The approach is imperfect; it’s associated with cytotoxicity and interrupted cell–cell interactions. As an alternative, a few studies have tested microgel supports in a scaffold-free process.

‘The challenge in translating a scaffold-free approach to bioprinting is that printed cells need something to hold them in place so that they maintain the desired 3D structure,’ says Daniel Alge, an expert in the field of tissue engineering at Texas A&M University, US, who was not involved in the study.

Taking on the challenge, a US-based team led by Eben Alsberg from the University of Illinois at Chicago has engineered a platform that works without an internal scaffold. The group demonstrated their technique by printing a rat-sized femur and a cartilage ear.

Considering the complexity of the structures, the entire printing process is relatively straightforward. A modified 3D printer deposits individual stem cells into an alginate microgel-filled bath. The alginate is then crosslinked, by exposing it to ultraviolet light, to secure the printed cell structure in place. Alsberg explains that within the bath ‘the cells are able to extensively contact each other physically and secrete, organise, degrade and remodel the extracellular matrix without the interference of an intervening biomaterial scaffold.’ This cell communication is important in forming tissue and is unimpeded by the alginate gel bath, whereas a scaffold interrupts cell–cell interactions. The team controls how the cells develop into an organ by adding nutrients and growth factors specifically formulated to direct cell differentiation. When the tissue is mature, gentle agitation separates the finished construct from the bath. A forward thinking user can even chemically engineer the support to degrade at a custom rate (within days or several weeks) and release the tissue as it finishes developing.

Alge describes the process as elegant and simple: ‘Printing is fast and can easily be scaled up. It could be a great tool for the burgeoning biofabrication industry.’

Scaling the process up to printing constructs made up of multiple different tissue types is something the group considers feasible. ‘High quality 3D printers with multiple nozzles may allow for even faster and more complicated 3D printing of tissues comprised of multiple cell types with higher resolution and fidelity,’ explains Alsberg. ‘One potential challenge is maintaining different cell phenotypes within the same construct.’

Alge says that in the future, ‘the challenge will be to produce hollow structures and a functional, perfusable vascular network, which remains one of the biggest hurdles facing the field’.