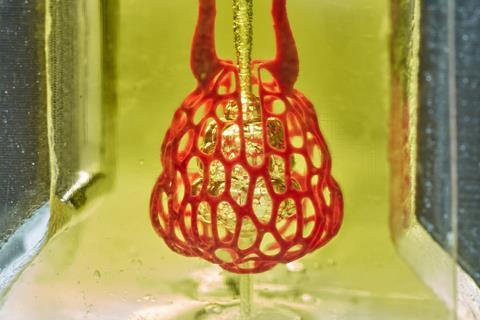 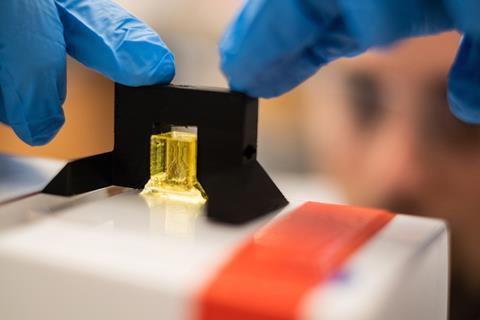 Rice University bioengineer Daniel Sazer prepares a scale-model of a lung-mimicking air sac for testing. In experiments, air is pumped into the sac in a pattern that mimics breathing while blood is flowed through a surrounding network of blood vessels to oxygenate human red blood cells. 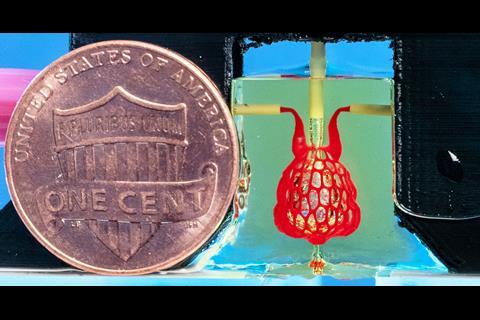 A US one-cent coin shown next to a scale-model of a lung-mimicking air sac with airways and blood vessels. 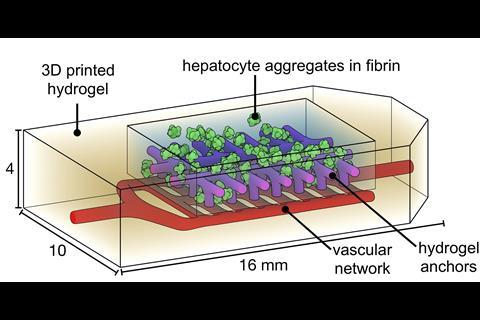 Experiments performed by Rice University and University of Washington researchers explored whether liver cells called hepatocytes would function normally if they were incorporated into a bioprinted implant and surgically implanted for 14 days in mice.

A yellow food colouring can be used to make complex bioprinted tubular structures akin to the vascular networks that transport blood, air and other vital fluids in our bodies. The work overcomes a major biocompatibility hurdle in tissue engineering and could lead to 3D-printed organs for transplant made from a patient’s own cells.

Vascular networks are integral to tissues and organs and nourish them and remove waste products. However, while researchers have made artificial tissues using 3D printing before, they have struggled to make intricate vascular networks to sustain them.

Scientists have explored 3D printing techniques to create artificial vascular tissues but they have tended to be too delicate and prone to collapsing. One promising 3D printing approach called projection stereolithography uses light to initiate chemical reactions to produce complex patterns in hydrogels. However, to create intricate structures, a light-absorbing additive is required to prevent unwanted photopolymerisation. The problem is that these chemicals are usually carcinogenic.

Now, researchers have discovered that synthetic and natural food dyes widely used in the food industry can be used as potent light-blocking chemicals alternatives to toxic photoabsorbers. The discovery enabled the team to design an open-source bioprinting technology dubbed Slate (stereolithography apparatus for tissue engineering) that they used to build intricate vascular architectures using hydrogels, including intravascular valves and a complex lung-mimicking air-sac with blood vessels.

‘We now have the freedom to build many of the intricate structures found in the body,’ says Jordan Miller at Rice University, Houston, US, who led the work. ‘With the addition of multivascular and intravascular structure, we’re introducing an extensive set of design freedoms for engineering living tissue.’

Initial experiments revealed that the synthetic yellow food colouring tartrazine, curcurmin, found in turmeric, and an anthocyanin from blueberries, as well as gold nanoparticles, could work as non-toxic photoabsorbers in hydrogels. But tartrazine was found to be the best, particularly because it could be easily washed out after fabrication to produce transparent structures suitable for imaging.

‘By using common food additives as photoabsorbers, the team has opened the possibility to exploit the benefits of stereolithography in biology and medicine,’ notes Alvaro Mata, a bioengineer at Queen Mary University of London, UK. ‘The fabrication of complex and functional vascular-like structures within large biologically relevant volumes is a major achievement that represents a leap forward for the field of tissue engineering.’

The Slate system works by printing soft hydrogels one layer at a time from a prehydrogel solution. When exposed to blue light, the layer solidifies. The desired structure is built up layer-by-layer using a projector that shines light from below to display sequential 2D cross-sectional patterns. The tartrazine additive works by absorbing blue light, which limits the solidification process to a very fine layer, enabling intricate and stable structures to be printed in minutes.

Tests of the lung-like structure showed that the tissues were strong enough to support blood flow and simulated human breathing. Further experiments revealed that red blood cells could take up oxygen as they flowed through a network of blood vessels surrounding the synthetic air sac. The team also revealed the therapeutic potential of Slate by successfully transplanting 3D-printed tissue containing blood vessels and mouse liver cells into mice with chronic liver injury.

This will undoubtedly lead to major advances in the rapid prototyping of synthetic tissues,’ comments Cole DeForest, who investigates biomaterials at the University of Washington, Seattle, US. ‘Though this represents a powerful step in the creation of customisable vascular networks, the current studies have been limited to vessels with millimetre-sized features,’ he adds. ‘An exciting future advance would be to “miniaturise” these techniques, such that smaller microvessels including capillaries can be printed with the same 3D control.’