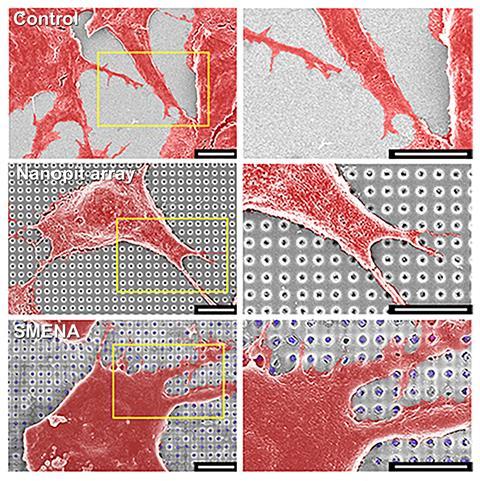 Using a metal–organic framework (MOFs), designed to control the release of an essential growth factor, researchers have designed a new substrate for raising stem cells that could hold the key to creating a set it and forget it device to develop this promising biomedical therapy.

Growing adult cell types from stem cells is the foundation of stem cell research and therapies and new techniques that can reliably and efficiently do this are in high demand. With this in mind researchers at Chung-Ang University devised a platform which uses MOFs to steadily release retinoic acid, an essential molecule to produce neuronal cells from stem cells, eliminating complex experimental steps.

MOFs have been known to chemists for decades. They are porous nanocrystals made by attaching organic ligands to metal ion connecting points. The combination of metal and ligand determines useful properties such as what it can store and release, the pore size and whether it’s stable for biomedical applications. The team used the MOF UiO-67 because it’s chemically stable for long periods of time and has a small pore size which helps control the loading and release of retinoic acid.

Another key feature of UiO-67 was its weight. ‘The biggest problem in this study is the coating technique of the nanoparticles onto the nano-pit array,’ explains lead author Yeon-Woo Cho. ‘We found that the nanoparticles should be heavy.’ Placing the MOFs in nano-pits was essential for keeping them out of contact with the cells and lighter options didn’t work. As Cho explains, ‘the MOF is very biocompatible for cells, but the most important thing is the interaction between cells and nanoparticles’, says Cho. These processes could destroy the MOF release system and are potentially cytotoxic if the cells take up high concentrations of MOFs.

Wenbin Lin, a chemist with an interest in nanomedicine at the University of Chicago, uses MOFs for cancer imaging and therapy research. ‘There are two interesting novelties in this work, one is that they combine [the] MOF with the nanofabrication methods,’ says Lin. ‘The other is that they’re using these to help differentiate stem cells.’ While still a proof-of-concept, Lin says it is ‘a nice way of using metal–organic frameworks for this particular application’.

In the future, the group from Chun-Ang University envisions a platform that incorporates several types of nanoparticles, not only MOFs, each controlling the release of different molecules. ‘Our final goal is to generate different cell types on a single platform by perfectly mimicking in vivo development processes,’ says Cho.