Using individual molecules as projectiles and targets in the world’s smallest archery setup, chemists in Canada have unravelled for the first time exactly what happens when two compounds collide to form a new bond.

Chemical reactions happen because two molecules collide in just the right way. But exactly which collisions – head-on or only glancing – lead to what type of reaction is difficult to unpick, says Kelvin Anggara. In a beaker, molecules constantly crash into each other at random.

Controlling how molecular collisions happen, explains John Polanyi, has long been thought impossible ‘because there is an intrinsic randomness to molecular motion’. But now, a University of Toronto team around Polanyi and Anggara has managed just that. They are the first to shoot an individual molecule across a metal surface into another molecule with precise control of the reaction’s impact parameter.

‘In physics, the impact parameter is by how much you miss the bullseye of your target,’ explains Anggara. ‘Since the impact parameter determines the outcome of a collision, being able to control it provides an important control over the reaction in question,’ adds Jennifer MacLeod, a surface science expert from the Queensland University of Technology, Australia. 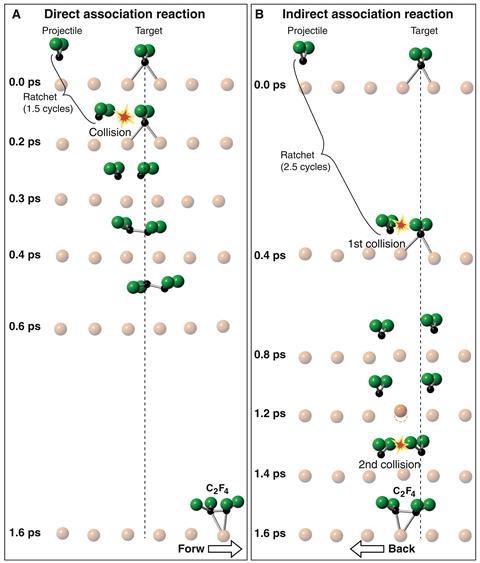 Polanyi’s team used scanning tunnelling microscopy to drop an electron onto a trifluoromethyl molecule bound to a copper surface at 5K (–268°C). The extra electron smashes one of the carbon–fluorine bonds. Guided by the copper’s crystal ridges, the remaining difluorocarbene (CF2) then races across the surface.

By depositing another CF2 radical either directly in the projectile’s path or slightly off-centre, the researchers could vary the impact parameter. After the reaction, the resulting tetrafluoroethylene’s position was recorded. Computer simulations helped the team to understand what happened within the trillionth of a second that it takes for the molecules to come together.

In a head-on collision, the fragments immediately form a new bond after they crash into each other. The new compound then skitters off along the surface. In a slightly offset collision, however, the radicals don’t react when they first bump into each other. Instead, they recoil, and then interact again over a single copper atom that catalyses a second, bond-forming collision.

‘Looking at molecular reactions on a surface can be a really useful model for understanding more complicated processes [such as metal-catalysed reactions],’ says MacLeod. However, she continues, it will be necessary to explore how different surfaces affect the measurements.

Anggara thinks that eventually it will be possible to shoot atomic oxygen projectiles at biomolecules to find out how reactive oxygen damage – thought to be one of the causes of ageing – occurs. ‘We are really just seeing the beginning of the possibilities associated with this capability through work like Polanyi’s,’ says MacLeod.