One of my favourite graphics is a visual paean to scientific and technological progress. Curated by the US National Renewable Energy Laboratory, it charts all of the record-breaking efficiencies of various kinds of photovoltaic cells, noting where and when they were achieved.

Most of the lines on the graph have gentle gradients that indicate slow and steady progress over decades of work. But look down at the bottom right of the graph, and you’ll see a different story: a red line, interspersed with yellow spots, shooting upwards out of nowhere at a bold 60° angle. These are perovskite cells, based on semiconductors such as methylammonium lead halides. The technology has made spectacular progress over the past decade and now boasts a champion efficiency of more than 22%, on a par with the best commercial silicon cells. 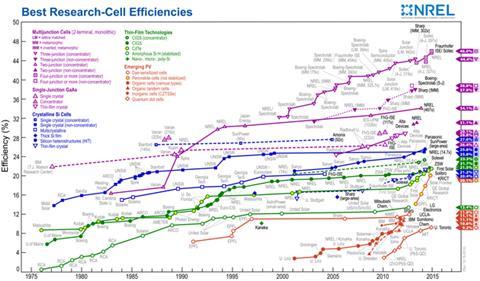 Perovskite solar cells (red circle filled yellow) have generated a lot of excitement. But is it all justified?

Perovskite cells rely on much thinner light-absorbing layers than silicon cells and can be made using high-throughput solution-based processes, so they might offer a cheaper and less resource-intensive way to harness the Sun’s energy. When combined with silicon cells, they can mop up unused parts of the solar spectrum, boosting the overall efficiency of a panel by several percentage points.

High efficiency isn’t everything, though. Long-term stability remains a major challenge for the perovskites, especially when commercial cells might need to maintain a decent performance for 20 years or more.

Researchers have been warning for years that crucial stability studies on these cells are being neglected as the field races for new efficiency records. Now, a literature analysis by researchers at Aalto University in Helsinki has revealed that stability tests are falling alarmingly short of what is needed to help push these cells to market.1

Researchers typically use accelerated aging tests to work out the operating lifetime of a solar cell. As a rule of thumb, 1000 hours of continuous light soaking is roughly equivalent to one year of normal light exposure in northern Europe. During that time, researchers may record changes in a cell’s efficiency, the relationship between its current and voltage, the structure of the perovskite material itself and a host of other factors that allow them to extrapolate a lifetime for the cell.

These tests also provide vital benchmarks to compare the effects on cell aging of different perovskite materials, cell architectures and preparation techniques. For a fair comparison, researchers need to report precise details about the test conditions and provide statistically robust results from several identical cells. In all too many cases, that isn’t happening.

The Aalto team surveyed 157 articles published in 2016 that reported stability tests on perovskites or the related class of dye-sensitised solar cells. They found that about half of the articles on perovskites only reported results from a single cell, and just 10% of them tested 10 or more cells, enough to provide a reasonably reliable assessment of performance.

Half of the aging studies were conducted in the dark, and just 13% involved cells that were actually producing power, which hardly mimics how they would be used in real life. Meanwhile, the articles rarely reported the humidity and temperature during the tests, or the intensity of any UV light that fell onto the cells. Since perovskites are particularly sensitive to moisture, and UV light is known to accelerate their degradation, these are significant gaps.

This is not to say that researchers are failing to make progress on perovskite stability.

Last year saw reports of perovskite solar panels that maintained an efficiency of 11.2% for more than 10,000 hours, and perovskite cells that ticked along at 20% efficiency for over 1000 hours under full sunlight at 60°C. But according to the Aalto analysis, these tend to be exceptions. Fortunately, there are some simple steps that researchers can take to raise their game.

Lab cells are usually made by hand, so preparing a dozen of them for testing is undoubtedly a drag. However, the rest of the testing process can be streamlined relatively easily. Researchers can hook multiple cells together and automatically monitor their performance, as well as the temperature, humidity and light intensity they experience, using inexpensive kit and simple computer code. The Aalto team also suggests that labs should invest in larger testing rigs – say, 50x50 cm – so that more cells can be tested in parallel. 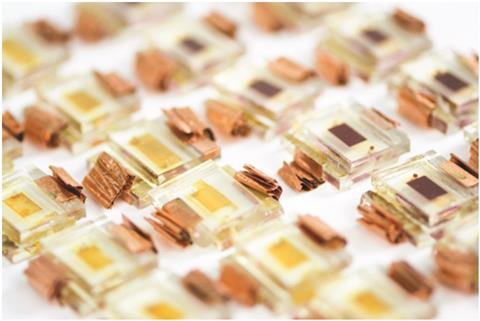 Durability tests on commercial silicon solar cells are based on internationally-agreed standards. Similarly, researchers working on other cells – organic solar cells, for example – have agreed on basic test protocols.

Perovskite researchers should do the same, and the Aalto team proposes a series of international summits to thrash out these standards. These discussions could also generate opportunities for researchers to collaborate with accredited standards laboratories, to pinpoint the best ways to conduct these tests.

It will also take a change in attitude from editors and peer-reviewers. Some journals already have checklists of what should be reported in photovoltaic research papers, but more rigorous standards should be applied across the board. Even stipulating a minimum number of cells that should be tested, and requiring that temperature, humidity and light intensity are all quantified, would make a big difference. As the Aalto team point out, these data could also feed into computational studies that tease out the common factors underlying degradation, for example.

Perovskite cells already have a bright future ahead of them. But better stability testing will help them to lead longer – and more profitable – lives.