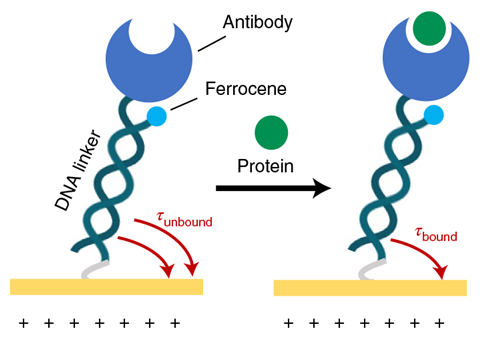 Reagentless electrochemical sensors that use molecular pendulums to detect protein biomarkers could lead to wearable, ingestible and implantable devices for personalised tracking and monitoring of many diseases.

Biosensors are widely used for biomedical diagnosis and monitoring. Most use reagents in order to detect chemical reactions with target molecules. However, reagents add complexity, time and work for such tests. Moreover, sensors that require reagents cannot make in vivo measurements.

To overcome this, reagentless electrochemical systems have been developed in recent years that use DNA aptamers to recognise biomolecules by binding to them. Transduction of the binding event then produces a read-out. However, such reagentless systems are limited by the number of analytes that can be detected by aptamers.

Now, Shana Kelley and her colleagues at the University of Toronto have designed a reagent-free system that uses antibodies instead of aptamers, enabling the detection of any protein. Importantly, the sensors can be used in vivo. ‘We were amazed by how well-behaved the system was,’ says Kelley. ‘We were not sure that we would be able to take measurements in living animals, so the results of those studies were a pleasant surprise.’

The team made sensors by depositing three gold electrodes on a 30mm long glass surface. This was then treated with a DNA-based probe solution, tethering the nucleic acids to the electrodes. The pendulums each consist of a DNA rod and an antibody ‘weight’, which can bind a specific protein.

The sensors work by applying a positive electric potential to one of the electrodes, which causes the negatively charged molecular pendulums to swing down towards the electrode’s surface. Once at the surface, a ferrocene redox reporter molecule in the DNA rod oxidises, resulting in a current. By measuring this current the researchers could assess the time it took for the molecular pendulums to swing down to the surface. When molecular pendulums are bound to a target protein, their movement is around three times slower than in the unbound state, providing a measure of whether a particular protein is present or not.

Experiments showed the sensors work in body fluids including blood, saliva and urine. Tests on the saliva of live mice suffering from induced heart failure revealed that the sensor could pick up a biomarker for the condition.

‘The idea of using lever-arm motion for signal transduction in biosensors has been around for a few years, but previous efforts had had trouble working in completely unprocessed, undiluted biological fluids, such as saliva,’ says Kevin Plaxco who develops reagentless sensors at the University of California, Santa Barbara. ‘The Kelley group cleverly thought to use an electrochemical technique in which the electric field is pulsed in such a way as to couple electrostatic driving and electrochemical readouts. Wonderfully obvious in retrospect.’

‘We think the reagentless format is ideal for the development of very simple and low cost handheld devices, but the most exciting application is definitely the development of new wearable and implantable sensors,’ says Kelley. ‘We are working on a variety of applications related to infectious and chronic disease and are very excited about the possibilities.’