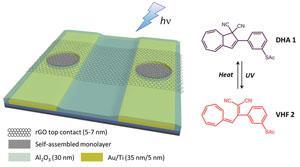 Chinese and Danish scientists have placed a transistor made from a single molecular monolayer onto an electronic chip. The new chip harnesses graphene oxide as a transparent electrode so that light can be used to switch the transistor. This breakthrough will ease the testing of other molecular components and could be an important step in the development of smaller, greener and cheaper electronic devices.

‘An advantage of using molecular components is that molecules can be designed and tailor-made to provide a range of interesting functions with tunable properties,’ says paper author Kasper Nørgaard, a chemist from the University of Copenhagen. ‘Our molecular chip could be a first step on the way towards integrated molecular circuits with unique properties.’

The concept of using molecules as active electronic components is not new, and has received a considerable amount of attention in recent years. In addition to being smaller, such molecular components may not need to be composed of heavy metals or rare earth elements, unlike traditional electronics, which would make their manufacture both cheaper and more environmentally friendly. Previous efforts to test possible molecules for this purpose, however, have been hindered by the difficultly of placing such tiny components into a circuit.

The prototype molecular chip, which can be easily fabricated, is made up of three layers: a gold layer, an organic layer and a reduced graphene oxide layer. The team used a self-assembled monolayer of dihydroazulene as the organic layer. This molecule can undergo a light induced reaction – transforming into the less conductive vinylheptafulvene – which can be thermally reversed.

The team discovered that the flexibility and conductivity of graphene oxide made it an ideal top-contact for the molecular device with its translucency enabling the underlying molecular transistor to be switched with a light impulse, something not possible with previous opaque contact solutions. Furthermore, the graphene oxide layer solves a longstanding issue in monolayer device fabrication as it shields against the risk of short circuits when metallic electrodes are deposited onto the molecular layer.

Using their chip as a test bed, the research team is now hunting for new molecules with potential electronics applications, while also exploring the potential for new chip designs for other functions, such as integration or logic.