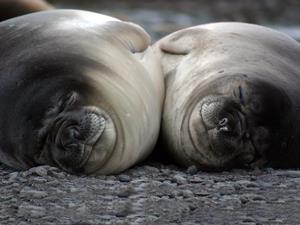 Elephant seals have been identified as a previously unrecognised source of mercury contamination in coastal waters by scientists at the University of California, Santa Cruz (UCSC). The research shows that the seals accumulate high concentrations of mercury in their fur, and then shed significant amounts of it into the water. The findings suggest that marine mammals could play an unconventional role in mercury cycling by redistributing mercury from the open ocean, where they pick up from their prey, to coastal areas.

Mercury’s most toxic form, methyl mercury, is known to accumulate in the bodies of marine organisms, and becomes more and more concentrated as it passes up the food chain. Concentrations in top predators like the elephant seal can be 1 million to 10 million times higher than the levels found in seawater.

A group of researchers led by Jennifer Cossaboon, now a graduate student at San Diego State University, found that the concentration of methyl mercury in the seawater around the elephant seal rookery at Año Nuevo State Reserve in California, was twice as high as most typical coastal sites during the elephant seal breeding season and 17 times higher during moulting season.

Cossaboon says it was surprising to find a methylmercury ‘hotspot’ in a location relatively isolated from traditional industrial inputs. The most likely explanation, she adds, is that methylmercury in the seals’ fur is ending up in the water. The animals undergo a ‘catastrophic moult’ in which their entire top layer of skin and corresponding hair is sloughed off in a matter of four to six weeks. Because elephant seals moult this way in crowded colonies consisting of thousands of animals, local mercury concentrations are amplified over the course of several months.

‘It is an intriguing idea that because these guys are top predators...they can provide this concentrated effect by virtue of the fact that they deposit much of their body every year when the shed their hair,’ says Mike Fedak, a marine biologist based at the Sea Mammal Research Unit at the University of St. Andrews in Scotland. ‘It is certainly an interesting finding, and it is not one that many people would have thought of before,’ he adds.

Identifying marine mammal rookeries as potential ‘hot spots’ of methylmercury contamination could enable a better understanding of the complex mercury cycle, Cossaboon says. ‘It is unclear whether the methylmercury in degrading [elephant seal] hair would be readily assimilated into mussel or fish tissues,’ she states, but adds that the potential for these seasonal fluctuations to affect lower trophic levels reinforces the need to decrease mercury emissions and reduce the amount of mercury entering the marine environment in the first place.