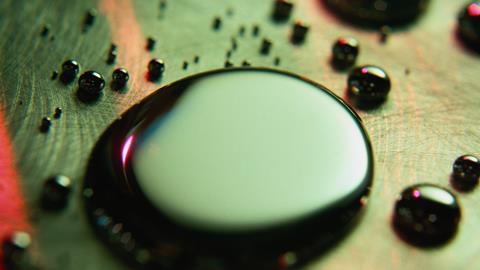 After nearly a century, scientists can explain why a grey cloud forms when mercury and water are sonicated

Under most conditions, metallic mercury and water do not react. The exception is when scientists apply ultrasound to mercury–water mixtures, which irreversibly forms grey clouds of particles; Robert Wood and Alfred Loomis discovered this in 1927. The reaction is possible in most laboratories within minutes, but how the grey cloud forms and what it consists of has never been completely understood. ‘Characterisation of the particles defied several attempts over the years and the formation of Hg(OH)2 went completely unsuspected,’ says Richard Compton who led the study at the University of Oxford, UK.

Compton explains that Hg(OH)2 molecules form when elemental mercury and OH radicals react in intense sound fields. The OH radicals come from cleaved water molecules subject to local temperatures of over 1000K. The temperature gets so high due to bubbles collapsing and releasing energy multiple orders of magnitude higher than the energy from the sound field. Direct evidence for Hg(OH)2 has so far been lacking but the researchers used its unique voltammetric signature to prove its presence. ‘Hg(OH)2 is the least stable of the known dissolved complexes of mercury,’ says Eduardo Ariel Ponzio, an electrochemistry expert at Fluminense Federal University in Brazil. ‘With a simple experiment, the researchers prepared stable Hg(OH)2.’

However, Hg(OH)2 is not what makes up the grey cloud seen when mercury and water mix in sound fields because it is soluble in water. Due to extreme local temperatures, ‘HgO is likely formed thermally from Hg(OH)2’ says Bertold Rasche, a postdoc in Compton’s group. Solid HgO surrounds tiny droplets of liquid mercury forming core-shell particles which appear as a grey cloud filling the reaction vessel. These unusual core-shell particles have liquid centres within solid shells which Rasche says may lead to more new biphasic particles being discovered.

Further applications include understanding environmental aspects of mercury behaviour as most mercury (II) compounds are insoluble in water. Jake Yang, a PhD student in Compton’s group, says the solubility of Hg(OH)2 ‘highlights the potential for environmental aquatic systems to hold large quantities of Hg in the form of Hg(II)’.