Nanomaterial stores radicals to power photopolymerisation in the dark

Functionalised carbon nitride nanomaterials capable of storing light energy in the form of long-lived radicals have made it possible for photoreactions to take place in the dark, new research shows.1 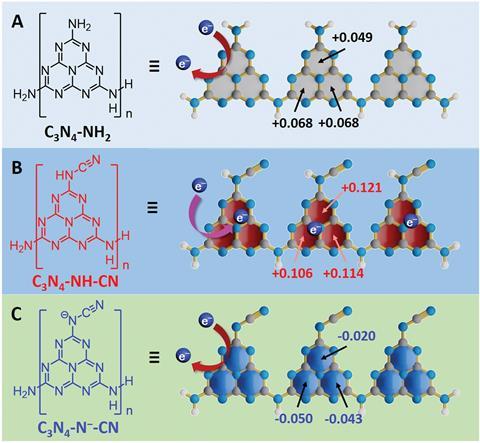 Chemical structures and distribution of partial charges on the C3N3 ring in the different carbon nitride trimers tested: (A) C3N4–NH2, (B) C3N4–NH–CN, and (C) C3N4–N−–CN

Photosynthesis, the process of converting light energy into electrochemical potential in plants and using it to drive reactions when dark has proven difficult to replicate in artificial systems. This is because photogenerated charge pairs tend to recombine after irradiation, which prevents photoreactions occurring in the absence of light.

On account of its ability to promote electron–hole separation, a team surrounding Ze Zhang from the University of Science and Technology of China, predicted that C3N4­-NH2 might stop charge pairs from recombining by trapping photogenerated electrons. Whilst electron–hole separation under irradiation took place when the team probed the material experimentally, electron paramagnetic resonance spectroscopy (EPR) confirmed that C3N4-NH2­ did not store electrons. Density functional theory calculations to determine the charge distribution of C­3N4-NH2 revealed that modifying the structure by replacing a proton in the amino (NH2) group with a cyano (CN-) moiety gave a more positive charge distribution, given the enhanced interaction of the heptazine rings toward electrons.2 Heptazines are nitrogen-rich aromatic systems, meaning they are strongly electron-deficient and likely to hold on to electrons, making them ideal candidates for electron storage.

Irradiating the C3N4–NH–CN species resulted in a blue suspension and a g value of 2.0021 using EPR, which is characteristic of stored electrons. Upon exposure to air, the electrons immediately reacted, and the suspension changed colour. Neither the C3N4–NH2 and C3N4–N--CN suspensions were blue in colour or showed an EPR signal. 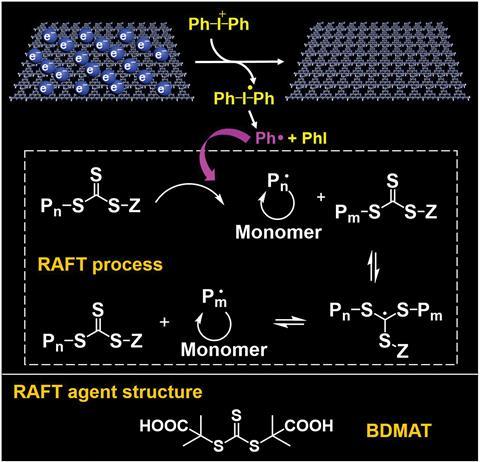 The trapped electrons can live for up to one month, and can directly drive RAFT polymerisation without light irradiation

To investigate the electron storage ability of C3N4–NH–CN, the team varied the proportion of protonated and non-protonated units by changing the pH. This led them to conclude that the more –NH–CN groups present, the greater the EPR signal strength and the stronger the colour of the suspension. Further analysis of C3N4–NH–CN involved methylene blue, which Zhang explains was due to its ‘significant absorption changes before and after accepting electrons, [meaning] it is helpful to determine the amount of electron storage.’ This investigation uncovered that C3N4–NH–CN with five layers could absorb all the methylene blue available after 10 minutes of irradiation, which was confirmed using EPR. The EPR signal intensity indicated that 50% of the stored electrons were still present after one month and available to participate in reversible addition-fragmentation chain transfer (RAFT) polymerisation. This process is initiated by electron transfer from C3N4–NH–CN to diphenyliodonium (DPI), which produces phenyl radicals that can react with the RAFT reagent to promote photopolymerisation. Relative to polymerisation under continuous light irradiation, fewer side reactions take place and the RAFT agent does not degrade, resulting in polymers with greater molecular weights.

Athina Anastasaki, based at ETH Zurich in Switzerland, whose research focuses on radical polymerisation remarks that the work ‘provides a new tool for the synthesis of advanced functional polymers that can be used for a wide range of applications.’ Zhang says the team hope to ‘continue to develop light energy conversion and storage materials and expand the application range of stored electrons.’