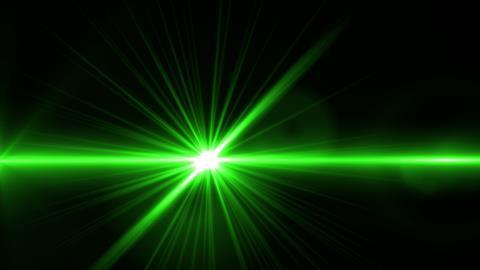 Solvated electrons are highly reductive so can force stubborn compounds to react where other reagents might fail. Now a team in Germany is generating them sustainably, using only a green laser and vitamin C. The group has used the technique to perform reactions previously impossible with a visible-light responsive catalyst.

Photons from the laser transform a ruthenium-based photocatalyst into an excited state, with a central oxidised ruthenium atom and a radical anion ligand. Vitamin C’s ascorbate dianion then quenches the excited species, producing a one-electron reduced form of the complex – where the ruthenium atom is no longer oxidised, but the ligand remains as a radical anion. Another photon can then eject the additional electron – generating the hydrated electron species that can induce reduction reactions of organic compounds, and simultaneously returns the catalyst to its ground state.

‘This is about harnessing the reducing power of the hydrated electron into doing something useful,’ explains the Martin-Luther University of Halle-Wittenberg’s Martin Goez, who led the project. ‘For instance the detoxification of halogen containing organic waste, or organic syntheses that are difficult to achieve in any other way because the redox potentials do not allow these reactions to proceed with ordinary reagents.’ 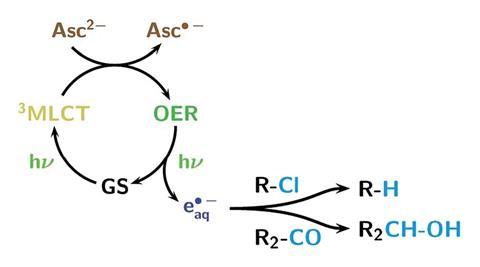 Goez explains that a benefit of using green light is that while most chemicals absorb strongly in the ultraviolet region, most organic chemicals do not absorb in the visible range – so the light is only absorbed by the catalyst, and not the substrate molecules.

Goez and his team demonstrated the system’s potential by performing reactions that were previously impossible with visible light-responsive photocatalysts. These included dechlorinating chloroacetic acid, a compound manufactured in large quantities that is harmful to the environment due to its stability and toxicity; and also reducing tert-butylmethylketone – before, visible light-induced reactions could only convert strongly activated carbonyls such as aryl aldehydes.

‘Solvated electrons are the most simplified chemical reduction reagent,’ says Burkhard Koenig a photocatalysis and sustainable chemistry researcher from the University of Regensburg, Germany. ‘With a reduction potential close to alkali metals they reduce many organic compounds leaving no waste.’

Koenig questions whether the cost of the laser set up – in the region of £20,000 – could slow the uptake of the technique. ‘The researchers behind the study argue that the initial cost does not matter, as the laser can be used for a long time,’ he says. ‘This is certainly true, but the initial investment and the fact that most synthetic labs and chemists working in environmental science have no experience with lasers, will hamper a quick application of the method.’

Nevertheless, Koenig believes Goez’s team has made an important first step. ‘The vision that we will be able to generate traceless reagents with the reduction power of metallic sodium by visible light is very appealing and no longer science fiction,’ he says. ‘Improved practicability will pave the way for a broader application in synthesis and environmental science.’