Scientists have gone beyond laboratory based experiments and have used a mesocosm to accurately study the fate of single walled carbon nanotubes (SWNTs) in wetland ecosystems, showing that SWNTs accumulate and persist in aquatic sediments. 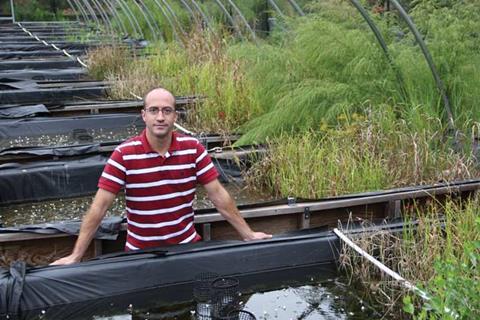 Pratt School of Engineering at Duke University, US

Single walled carbon nanotubes are an intriguing class of nanoparticle, and their unique properties have led to their use in a wide variety of applications, ranging from microelectronics to energy storage and even drug delivery. However, the impact of SWNTs on the environment is not fully understood. As the use of SWNTs in industry increases, environmental contamination due to spills of SWNT-containing waste or weathering of SWNT-containing products becomes ever more likely, and so the importance of studies focusing on the fate of SWNTs in the environment is growing.

In recent years, investigations into the environmental impact of SWNTs have been primarily based in laboratories, with studies being performed under well controlled conditions and over relatively short time frames. However, Lee Ferguson and his research group from Duke University, US, have now broken the mould by using a mesocosm to more accurately simulate what happens to SWNTs when they are released into a wetland ecosystem.

A mesocosm is a small-scale replication of a natural environment that can be studied under controlled conditions. The wetland mesocosm at Duke University consists of a water-tight rectangular box filled with everything that you would expect to find in a normal aquatic ecosystem, including natural water and sediments, aquatic plant life, insects and even fish. Furthermore, because the box is outside, it is open to the elements and undergoes natural fluctuations in temperature and water level, providing a more representative simulation than any laboratory experiment.

When a dose of SWNTs was released into the mesocosm, the team observed some interesting results – the most notable being that the SWNTs very quickly associated with other particles in the water and sank to the bottom, accumulating in the sediments. Given that SWNTs degrade extremely slowly (if at all), this could lead to long-term exposure of animals living in or near the sediments. However, no bioaccumulation occurred in the aquatic organisms studied, and so Ferguson stresses that the results should not be cause for immediate concern. ‘Our results should not be overly alarming to regulators, manufacturers or users of SWNTs,’ says Ferguson. ‘Instead, they should provide important guidance in assessing the potential fate of these materials in important environmental compartments such as aquatic ecosystems. Hazard and risk assessments for SWNTs should take this into account and consider the possibility that sediments may be an important sink for these materials once they enter the aquatic environment.’

Howard Fairbrother, an expert in environmental chemistry from Johns Hopkins University, US, has high praise for the work, saying ‘this study by Ferguson and co-workers provides important new information on the long-term fate and partitioning of engineered nanomaterials across the various and diverse compartments contained within a wetland mesocosm.’ However, the results themselves were not the only remarkable aspect of the work. ‘In addition to its intrinsic scientific value in risk assessment models and in focusing future research activities, this study represents a significant advance by demonstrating the ability to accurately and quantitatively track nanoparticles within complex, realistic aquatic environments,’ Fairbrother says.

Ferguson and his team are now actively surveying wastewater and sediments in potentially contaminated locations to examine the actual occurrence of SWNTs in the natural environment.