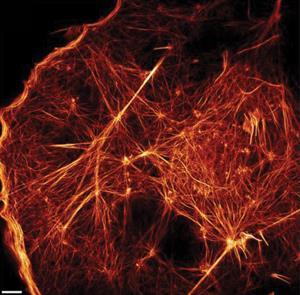 Eric Betzig, winner of the 2014 Nobel prize in chemistry, and his colleagues at the Howard Hughes Medical Institute, US, have fine tuned an off-shoot of their super-resolution microscopy technique to image dynamic processes within the cell membrane for the first time.

Betzig, along with his co-recipients, Stefan Hell and W E Moerner, received the Nobel prize last year for successfully beating the diffraction limit of a microscope using fluorescence microscopy. Whereas Hell depleted fluorescence around a nanometre area to obtain a super-resolved image of a cell, Betzig and Moerner, working separately, explored the ability to turn the fluorescence of individual molecules on and off.

Betzig and his colleagues have now refined a spin-off of this fluorescence switch, structured illumination microscopy (SIM), to create a new method called patterned photoactivation non-linear SIM. The team periodically illuminated a small subset of molecules in a sample, as opposed to the whole sample, to mitigate cell damage, and captured images in a fraction of the time taken using standard SIM. By using an ultra-high aperture, they were also able to improve the SIM resolution from 100nm to 84nm.

Using this high speed illumination technique, the team can visualise the movement of different proteins, such as clathrin and caveolin, simultaneously and see how they interact to facilitate molecular transport across a cell membrane.