As regulators look to limit the use of many synthetic crop protection chemicals, alternatives derived from or inspired by biology offer the promise of potentially safer, more environmentally benign substitutes.

The European commission this summer proposed halving the use of synthetic pesticides in the EU by 2030. If accepted, an enforcement framework would compel farmers and groundskeepers to consider alternative pest controls – such as insect predators, microbes or substances extracted or copied from natural sources – with synthetic pesticides as a last resort.

Yet the biocontrol industry complains that the regulatory system is not well set up to deal with such products. That is causing excessive delays in getting them onto the market, despite demand from growers and policymakers. 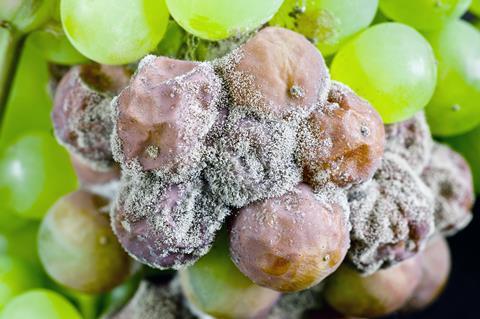 Plant extracts and antibody-based fungicides are initially targeting high-value crops like fruit, since they tend to be more expensive to produce than synthetic chemicals

Insect pheromones are among the most popular and established biocontrol agents, with some being used since the 1960s. Many are volatile esters that female moths emit in low concentrations to attract males.

Synthetic versions can be slowly released to lure male moths into traps – either to monitor for their presence or to trap and kill them. Another strategy is to release high enough concentrations to confuse the males, preventing them locating females. ‘You are not actually killing the insect, but instead putting the natural insect pheromones out there to disrupt mating,’ explains Corey Huck, head of biologicals at Syngenta.

Huck suggests that, particularly for moths and their caterpillars, there is a need to provide new approaches to supplement ageing synthetic chemicals. Modern integrated pest management (IPM) strategies combine pheromones and other control methods with synthetic sprays.

But there are also new strategies. Jones recently added a pear ester, used by female codling moths to locate plants for egg laying, to the sex pheromone. This cocktail caught male and female moths and showed five-fold increased attraction in tests in the UK, Australia and New Zealand. IPS also developed a chemical lure for the garden chafer beetle, which can kill strawberries and young vegetables, using volatiles released by flowers.

Another option is to find volatiles that plants produce when attacked by insects to attract their predators. IPS is testing methyl salicylate, a minty odour produced by many plants, with commercial raspberry growers in the UK. ‘We’ve shown that we can attract more hoverflies, more lacewings, more pirate bugs and more parasitic wasps onto the crop. It is very effective,’ says Jones. They need to show now that this approach attracts enough predators to control pests such as thrips and aphids.

While pheromones can work well against insects, other pests require different approaches. Biotalys – a biotech start-up in Ghent, Belgium – is developing products based on the distinctively small antibodies of camelids. These peculiar ‘nanobodies’ were discovered at the Flemish Institute of Biotechnology in Belgium, and developed for pharmaceutical applications by spinout Ablynx (now part of Sanofi). The technology has now also been licensed to Biotalys for agricultural uses.

Evoca, the company’s lead product, is a bio-fungicide, initially developed for grapes and strawberries. ‘It inhibits the growth of botrytis, especially when treated at flowering time,’ says Carlo Boutton, chief scientific officer at Biotalys, who also helped build the nanobody platform at Ablynx. It was developed by immunising a llama with a fungal protein, and capturing the nanobodies generated.

Getting a product registered in Europe involves a lot of hurdles. It is very difficult and takes a lot of time and money

‘It is one-tenth the size of a [regular] antibody,’ says Boutton. ‘The small size means that it is very stable, which is so important for our applications, and also makes engineering it easier.’ The company says hundreds of trials have proven that Evoca is effective, including independent studies at academic institutions in the US, and trials in Japan, Europe, Brazil and South Africa. ‘We will gradually replace some of the chemical fungicides,’ says Boutton.

Evoca won best biofungicide product at the World BioProtection Summit and Awards in Birmingham, UK, in May 2022. It has a completely new mode of action and the company expects it to also work against powdery mildew and other fungal diseases. The initial focus with Evoca will be in high value crops, since production of the nanobodies relies on a yeast fermentation and is currently expensive.

The company says it has boosted production yields five-fold this year, and it is investigating filamentous fungi instead of yeast to further reduce costs. ‘We’re working with Olon in Italy as a contract manufacturer,’ says Toon Musschoot, head of communications. ‘We recently scaled production from 35,000 litres per batch to 120,000 litres per batch.’

Cost is also an issue with pheromone chemical synthesis, though there is a push to produce them using fermentation too, from companies such as BioPhero in Denmark. ‘There’s new technology around bio-fermentation processes that can bring the cost of pheromones down to the point where they could be used [beyond just] high-value crops,’ says Huck.

Biotalys expects to launch Evoca first in the US, either at the end of this year or early 2023. The company estimates European approval will take twice as long, with an EU launch in around 2025. Beyond that, the company has a pipeline to develop other fungicides, bactericides and bioinsecticides.

The slow European approvals process is a constant complaint from companies. ‘In the US, you have a specific pathway for non-chemical protection products,’ says Musschoot. In Europe, chemicals and biologicals travel along the same regulatory pathway, with some minor modifications, leading to a backlog of biological products.

‘The US and Brazil are far ahead and getting further ahead of the EU, in terms of biologicals,’ says Willem Ravensberg, senior regulatory affairs manager at Koppert Biological Systems in the Netherlands. He notes that the regulatory data requirements were set up for a single molecule, so if a company comes with a plant extract, it gets extremely complicated very quickly.

The problems are widely acknowledged, and the European commission has recommended changes to data requirements for microbial products. ‘They hopefully will be accepted by the end of the year, and in theory a more appropriate set of questions, more based on biology, will allow the process to go faster,’ says Ravensberg, but time will tell. ‘The biocontrol industry is not optimistic,’ he adds. 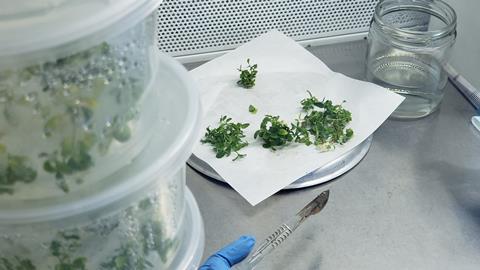 The commission then plans to adopt changes to requirements for pheromones and subsequently plant extracts. ‘They are working on it, but this all takes time,’ Ravensberg complains. ‘Britain has a chance [with Brexit] to design a better system, maybe even one that can be an example for the EU,’ he adds. Meanwhile, the rest of the world is moving on.

Yair Nativ, head of sales at STK in Israel, agrees. STK developed a biofungicide (Timorex) based on Australian tea tree oil that is licensed in several countries, including the US, Canada, Australia and across Latin America. The company also sells a hybrid fungicide (Regev), combining tea tree oil with traditional fungicide difenoconazole to control botrytis, powdery mildew and other fungal diseases in tomatoes, grapes and leafy vegetables. It has shown positive trial results against soybean rusts and brown spot on potatoes.

Timorex ‘is mainly for crops that are intended for export because of the low residues left behind on the produce,’ says Nativ. However, the company is yet to receive EU approval. ‘Getting a product registered in Europe involves a lot of hurdles,’ says Nativ. ‘It is very difficult and takes a lot of time and money.’

Assuming products can navigate the regulatory pathways, plant extracts are potentially a rich source of pest controls, given the variety of chemicals they produce to defend themselves against insects and pathogens. Botanical Solutions (BSI) – a start-up based in Santiago, Chile – has developed an antifungal using extracts from the Chilean soapbark tree (Quillaja saponaria). The product, Quillibrium, contains a mixture of phenolic compounds such as salicylic acid and a variety of saponins, including the fraction QS-21, which is the basis for new immune response-boosting adjuvants for vaccines.

BSI extracts its ingredients from laboratory cultures of Quillaja, rather than bark from established trees, says co-founder Gustavo Zuniga. ‘This allows us to be self-sustaining, producing plants throughout the year, without environmental effects or damaging natural ecosystems.’ The product inhibits the growth of fungus and especially crucial disease-causing enzymes such as laccase. It is sold throughout Chile, Peru and Mexico (in partnership with Syngenta) for tomatoes, grapes and fruits, with plans to move into the US market next year.

IPS is also looking at the molecules plants exude after insect attacks, which induce neighbours to invest in defensive structures. This includes thicker waxy cuticles and defensive leaf hairs to deter pests such as aphids. ‘We are looking to see if we can prime crops against insect attacks,’ says Jones, ‘and I’m interested in whether we can develop dispensers to release plant-derived volatiles that encourage plants to develop defences.’

Agrochemical industry consultant Jon Amdursky in Florida, US, says that 15 years ago, big agrochemical companies and smaller biocontrol companies were at loggerheads. ‘Since then, there has been a marriage between chemistry and biology,’ he says, with big companies acquiring, producing and distributing more biological products.

Syngenta’s Huck is excited about the variety of startup companies developing biocontrols with entirely new modes of action, such as a peptide bioinsecticide from Vestaron. Syngenta has an internal programme developing RNA interference for pest control, and collaborates with several start-ups. One, GreenLight Biosciences, last year reported proof-of-concept tests for its yeast-based RNAi technology that turns off a gene in Colorado potato beetle larvae. This kills the bug and reduces plant damage. ‘This is the first RNAi product, as we understand it, in the regulatory process in the US,’ says Huck, adding that US approval is expected in 2023.

The market for biological products is around £4 billion, compared to the global crop protection market of around £60 billion. However, rapid adoption of biologicals means that market is expected to grow around 15–17% a year. Syngenta’s biologicals are sold into traditional crops such as fruit and vegetables, but increasingly into row crops (such as potatoes and soybeans) as well.

Most of Syngenta’s success has been in biofungicides, followed by bioinsecticides, Huck explains, ‘but the really difficult area is bioherbicides’. There are few alternatives to conventional chemical weed killers. ‘There is still a lot of science to be done in biocontrol portfolios,’ he concludes.