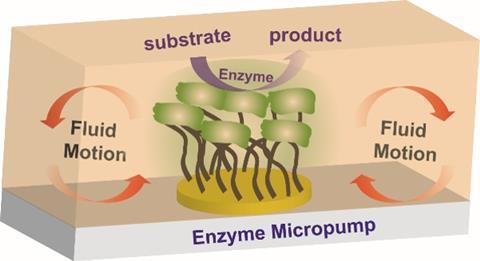 The tethered enzyme system can breakdown nerve agents and then use the products to fuel its pumping of an antidote. The system has been shown to work with the nerve agent Soman

An enzyme that can both break down nerve agents and use them as fuel to pump antidote to the site of an attack has been developed by researchers in the US.

Back in 2014, Ayusman Sen’s group at Pennsylvania State University developed an enzyme-based nanopump. The team showed that when tethered to a surface, enzymes could pump fluid in a given direction without the need for an external fuel source. ‘We found out that when enzymes facilitate a reaction they generate mechanical force,’ says Sen, who was speaking at the 256th meeting of the American Chemical Society in Boston, US. ‘If you attach the enzyme to a support this force gets transmitted to the [surrounding] fluid, so in a sense they become nanofluidic pumps.’ 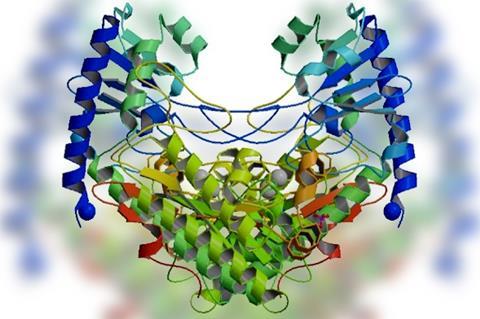 In the previous work, Sen and colleagues demonstrated pumps made of the enzymes catalase, glucose oxidase, lipase and urease and showed that the pumping speed was dependent on the concentration of the chemical they break down. Now, the team has developed pumps using an engineered enzyme that can destroy organophosphate nerve agents – organophosphorus acid anhydrase (OPAA). The enzyme hydrolyses nerve agents such as sarin into less harmful chemicals, action which is converted into movement as they simultaneously pump an antidote such as atropine or pralidoxime through a hydrogel on which the enzyme molecules are immobilised.

‘It’s a one-two punch – it’s destroying the nerve agent, using it as a fuel and pumping out antidote,’ Sen says. ‘The effect is immediate. These enzymes will cause the destruction of hundreds of thousands of molecules per second so they are really, really fast. As soon as it sees the nerve agent it will start to pump.’

After testing the OPAA pumps in their own lab using the sarin mimic diisopropyl fluorophosphate, Sen and colleagues sent them off to the US Army’s chemical and biological warfare lab in Edgewood, Maryland, where they were shown to work with the real nerve agent Soman.

Sen hopes the technology will eventually be developed into products that could be used to protect soldiers or other at-risk individuals in the event of a nerve agent attack. The next steps will include finding ways to administer it in a real-world setting. ‘One [way to do this] would be in the form of an ointment where the soldier in question can put it on the skin,’ says Sen. ‘Nerve agents are liquids so they are delivered as droplets, so when the droplets land on the ointment that will turn on the pump and then they will get destroyed and the antidote will get released.’

The group are also exploring using the enzyme pumps for other applications, such as drug delivery. They have made one using the enzyme glucose oxidase that pumps insulin in response to the presence of glucose.