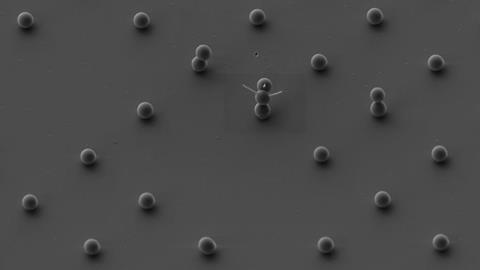 The world’s smallest snowman has been created using a scanning electron microscope. The instrument’s operator at the western nanofabrication facility at Western University in Canada claims the tiny sculpture sets a new record, standing at just 3μm tall. 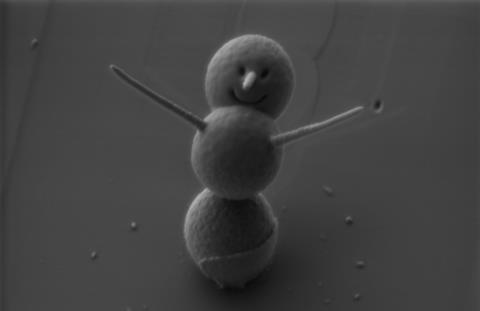 Todd Simpson from Western University created the original ‘snowman’ by accident back in 2005. In an effort to create isolated silica spheres he deposited a solution of them on a polymer film pockmarked with nanoscale holes. When the film was removed the isolated spheres were left behind. But in some case the holes were a little deeper and more than one silica sphere dropped in to create a dimer. And in rare instances a dimer could end up stacked on top of another silica sphere to create the three-ball snowman – although it had no arms or face at this stage.

This year, Simpson found the old sample and used the lab’s focused ion beam instrument to carve out the snowman’s eyes and mouth. The ion beam can also be used to deposit platinum and so he ‘grew’ arms and a nose for the sculpture. Each silicon sphere is 0.9μm in diameter making the snowman just shy of 3μm.

The nano-snowman is reminiscent of one created back in 2009 by David Cox, a National Physical Laboratory research fellow at the University of Surrey, UK. His snowman was made in a similar manner but was substantially larger than this new one – almost 10 times the size at a little under 30μm. Cox’s snowman can be seen in the video below.