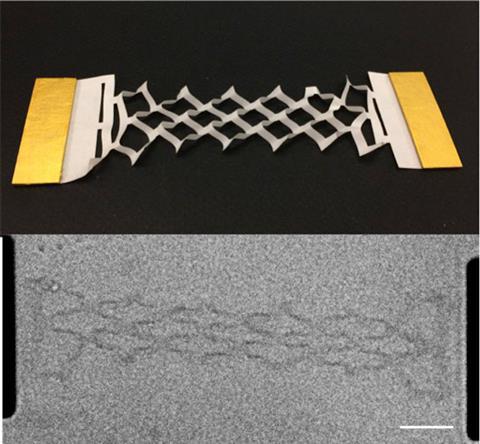 Graphene can be used to create kirigami springs that maintain their conductivity when stretched. (Scale bar 10 microns)

After discovering that graphene sheets bend and crumple just like paper researchers in the US hit upon the idea of using the material in the ancient Japanese art of paper-folding to make three-dimensional structures. Employing kirigami, a variant of origami that includes cutting, the team created graphene hinges and springs. The team claims that the technique could be used in the production of super-soft electronics and sensor devices.

Graphene, the one atom thick two-dimensional carbon allotrope, which won its discoverers the 2010 physics Nobel Prize, has made headlines recently as it has made its way into everything from light bulbs to water purification technologies. Prized for its superior conductivity and flexibility intensive research is under way to employ it inflexible electronics to produce bendy displays and LEDs.

While investigating the mechanical properties of graphene, researchers from Cornell University, US, found that their graphene sheets were stiff like crumpled paper. ‘We were quite surprised by this,’ says Paul McEuen, who led the team. They had expected graphene to be far more flexible. ‘We could take atomic scale predictions of what [the stiffness] should be, and the answer we got was very different from what we measured.’

Exploiting its paper-like nature, the team used principles from kirigami to make microscale spring and hinges. ‘It was really just curiosity and fun,’ McEuen says. ‘We were just talking about what to do with an atomically thin piece of paper and the obvious idea of doing these kinds of paper arts came up.’ The researchers first patterned the graphene and then removed the unwanted pieces using an oxygen plasma.

They found that their kirigami creations held their shape: despite the graphene hinge being only one atom thick, it was still intact after being opened and closed 10,000 times. Similarly, the extension of the graphene spring didn’t affect its conductive abilities. The applications of these findings are potentially far-reaching. The researchers point to super-soft electronics to monitor cells as one interesting area. ‘Let’s say you want to record the firing of a neuron,’ says McEuen. ‘We’re trying experiments right now to put a kirigami graphene structure over a neuron and see if we can do a better job of sensing its firing – but that’s work in progress.’

‘This is a remarkable piece of work that opens new avenues for nano-electromechanical systems and also adds to our understanding of graphene membranes,’ says Jannik Meyer from University of Vienna, Austria, who wasn’t involved with the study. However, he stresses the need for further research: ‘I look forward to seeing whether these devices can also operate outside of the liquid solution, which is an important next step for realising their potential.’