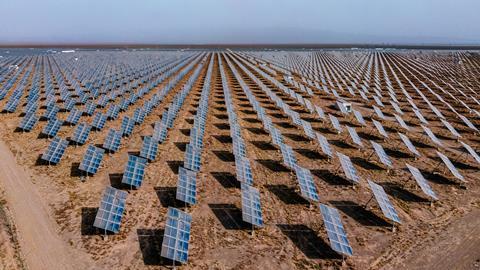 A new technique for electrostatically removing dirt from the surface of solar cells could remove the need to regularly wash them, potentially saving billions of litres of water every year in some of driest regions on Earth.

Solar energy is perhaps the most appealing renewable technology as it is widely scaleable and is readily available in arid regions that are sparsely populated. However, such regions are often dusty and this can rapidly obscure the surface of a solar cell. Dust can be removed by regularly pressure-washing the surface, but washing the solar cells accounts for up to 10% of the maintenance costs of a typical solar farm, with enough water used every year worldwide to satisfy the needs of two million people. Moreover, as the water often has to be shipped in and purified, ‘there is a CO2 footprint associated with the water footprint too’, explains Kripa Varanasi of the Massachusetts Institute of Technology.

Some solar farms clean by dry scrubbing. This is less effective, however, and abrasion gradually reduces the transparency and therefore the efficiency of the solar cells. Lifting the particles electrostatically is a tantalising idea that has been implemented on extra-terrestrial rovers. Unfortunately, these systems, which work by surface charge induction in a non-uniform field, require microfabricated electrode arrays either on or inside the surface of the cell, making this difficult to roll out at scale. 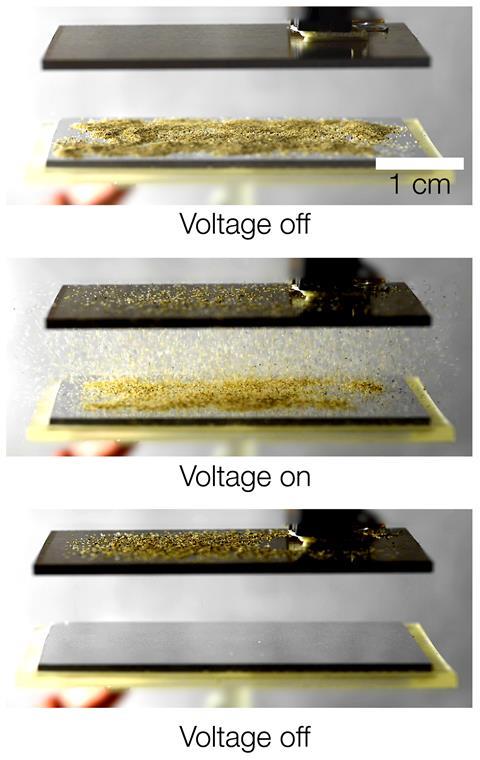 Dust particles spread on the bottom metallic electrode are observed to repel on application of voltage (~12kV) between the plates separated by ~1.5cm

Varanasi and colleague Sreedath Panat demonstrate a simpler solution, covering the solar cell with a transparent electrode and causing the particles to become charged by an applied potential. This is unexpected because desert dust largely comprises silica – an insulator that should not become charged by contact with an electrode. However, the researchers showed that, at humidities above around 30%, which even most deserts achieve at nighttime, the particles behaved in tests like steel grains, rather than insulating Teflon particles. They concluded after further tests that, as silica is extremely hydrophilic it becomes surrounded by a shell of conductive water molecules.

The researchers designed a prototype solar cell with a cleaning system comprising a robotic arm swept over the surface of a dust-covered transparent aluminium zinc oxide conductor. When they applied a voltage of 12kV between the two, they observed up to 95% recovery of output power. Varanasi believes such a system could be retrofitted to existing silicon solar cells and could potentially be integrated into the production of future thin-film solar cells during manufacturing. He estimates the technology could save 80–90% of the cleaning costs, although they will know more after field trials.

Malay Mazumder of Boston University, US, sees both promise and challenges. ‘This is an innovative method of electrostatic removal of particles and has potential applications,’ he says. He notes, however, that the cost of the aluminium zinc oxide could be more than the cost of the underlying solar cell and that applying a 10kV potential to each module could require considerable additional equipment. ‘Perhaps, most importantly, the authors did not address the operational safety of the process involved. A conducting plate with 10,000V DC applied to it can potentially create a dangerous life-threatening hazard.’