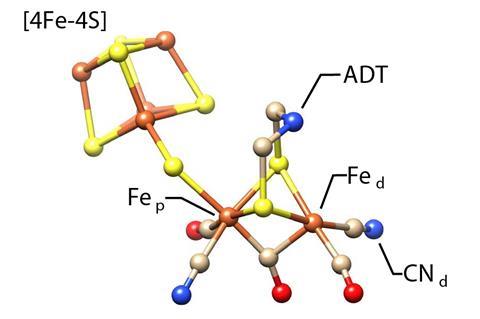 An electron paramagnetic resonance (EPR) method that works with nanolitre volume crystals could tease out new information about enzymes without the need for large and difficult to grow crystals. The technique, which is based on a special resonator geometry, can be used to perform EPR experiments on very small protein crystals such as those commonly used for x-ray crystallography. The new setup enables detailed studies on far more proteins than previously possible.

Many important biochemical processes can be investigated using EPR. The technique is particularly useful for studying enzyme reactions because it can provide valuable information on the electronic structure of the active site. In a typical EPR experiment, a frozen solution of the biomolecule is placed in a microwave cavity – a type of resonator – but the amount of information obtained in this way is limited. Although single-crystal EPR experiments could provide more data, this method is rarely applied to protein systems because of challenges in growing suitable crystals. Many samples used in x-ray crystallography have dimensions in the 0.05–0.3 mm range, but crystals of this size are too small to be studied using commercial EPR spectrometers.

Researchers in Germany have now found a way to increase the sensitivity of EPR experiments by a factor of up to 28 by replacing the microwave cavity of conventional setups with a self-resonant microhelix, which consists of a small tightly wound spring made of silver wire. ‘One can think of it as a lens for magnetic flux that is designed to maximise the filling factor for very small samples,’ says Jason Sidabras at the Max Planck Institute for Chemical Energy Conversion. In an EPR experiment, the sample interacts with the magnetic flux and this gives rise to the signal measured by the instrument. ‘If the sample is too small, we need a way to focus the magnetic flux on it. The microhelix does this very well,’ Sidabras says. ‘Due to its size and shape, it has a specific electromagnetic resonance frequency. It is called “self-resonant” because the resonant frequency comes directly from the geometry.’

The team tested the new method on tiny crystals of [FeFe]-hydrogenase – an enzyme of interest in energy research because it catalyses the production of hydrogen from protons and electrons. ‘An important characteristic of this system is the so-called g-tensor,’ Sidabras says. ‘For the first time, we have measured this quantity in [FeFe]-hydrogenase. This required the experiments to be performed with single crystals of the enzyme. Previous studies used very large crystals – 1 mm or larger – and long measurement times. With this new setup, experiments that would take weeks can now be performed in days.’

‘This is a really nice technological improvement,’ says Stefan Stoll of the University of Washington, US, who was not involved in the study. ‘Crystals of proteins are always very small, and up to now EPR was not sensitive enough to get signals from such crystals. Now, this is possible!’

Dimitri Svistunenko at the University of Essex, UK, agrees. ‘Such an advance in methodology is particularly promising because it allows relating EPR data to the x-crystallography data obtained on the same batch of microcrystals. This helps to understand how enzymes work when looking at them from different perspectives,’ he says.