A new, direct band gap allotrope of silicon has been synthesised by researchers in the US. It could potentially revolutionise solar cells and light-emitting devices by combining the light absorbency of materials like gallium arsenide with the processing advantages of traditional silicon. The present synthesis is long and expensive, but the researchers think it might be possible to get around this.

Silicon is the mainstay of the electronics industry, but the common cubic diamond-structured allotrope has an indirect band gap, which means electrons cannot travel between the valence and conduction bands simply by absorbing or emitting a photon: they also require a phonon to conserve momentum. This makes silicon a relatively inefficient absorber and emitter of light. Silicon solar cells need a thick silicon wafer to absorb enough light, while LEDs require more expensive materials like gallium arsenide, which decomposes easily and is toxic. 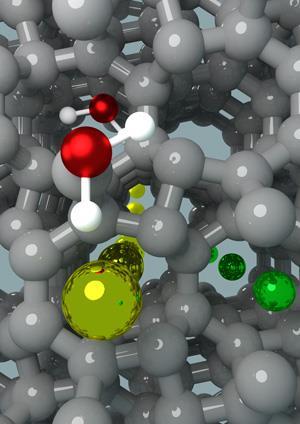 The new Si24 allotrope has an open-framework structure of 5-, 6- and 8-membered sp3-bonded silicon rings

The tetrahedral bonding of silicon enables a wide variety of hypothetical metastable structures, many of which have only slightly higher energy than the common ground state. Many of these have been observed at high pressure and four are dynamically stable under ambient conditions. In 2013, Timothy Strobel and colleagues at the Carnegie Institute in Washington discovered Na4Si24.1 Now they have shown that heating the Na4Si24 to 400K in a vacuum gradually drives off the sodium atoms, leaving a new, orthorhombic allotrope of silicon.2 Theoretical calculations and experiments suggest the material is stable up to 750K and 10GPa, and has a direct band gap of about 1.3eV – ideal for photovoltaic cells.

The material has only been produced in powder samples and the tricky manufacturing process would obviously limit its industrial potential. Nevertheless, Strobel is optimistic that these difficulties can be overcome. ‘Right now, we’re focusing on developing a recipe to grow very nice quality single crystals,’ he says. ‘Once we do that, we can really validate whether or not this material has a chance to revolutionise semiconductor technology. Furthermore, if we can get a reasonably-sized substrate of this crystal, it’s entirely possible that we can produce this allotrope completely free of any high pressure whatsoever and epitaxially grow crystals on the size that we can make now with diamond.’

Physicist George Nolas of the University of South Florida, US, believes the most significant aspect of the paper is the novel synthetic approach, which, he says, ‘can be employed in the synthesis of other open-framework material systems’. Electronic structure theorist Artem Oganov of Stony Brook University in New York, US, also applauds the sophisticated methods used to produce the material. ‘The question now is: can this material beat silicon or not?’ he says. ‘If it cannot, well, it was a good attempt, and these attempts certainly should be repeated. If it can, then it’s time to open the champagne!’