New source of hydroxyl radicals found in the clouds 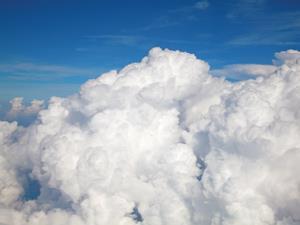 An international collaboration of scientists has discovered a previously unidentified source of tropospheric hydroxyl radicals generated by the interaction of ozone with the surface of clouds. Their simulations predict that the rate of hydroxyl radical production at the clouds’ air–water interface could be four orders of magnitude higher than in the rest of the atmosphere.

‘This is an important finding because the hydroxyl radical is the main “cleaner” of the atmosphere, and all the sources and sinks of this radical, which are gas phase, play a key role in the chemistry of the atmosphere,’ explains team member Josep Anglada, from the Institute of Advanced Chemistry of Catalonia, Spain.

While better known as the atmospheric trace gas that protects us from much of the solar UV radiation, ozone is also an important source of hydroxyl radicals in the troposphere owing to photodissociation. Nonetheless, according to Anglada, even though many atmospheric species are adsorbed at the air–water interface, up until now the chemistry at the interface has often been overlooked.

Applying quantum mechanics and molecular mechanics method first used to study biochemical reaction pathways, the team simulated the effects of water on the spectroscopic signature and dissociation rate constant of ozone adsorbed at the cloud surface. Crucially, they predicted that ozone exhibits a strong affinity for the air–water interface. ‘Our results suggest that the ozone adsorption process is thermodynamically spontaneous,’ Anglada says. ‘The predicted frequency shifts and enlargements of the spectral bands reveal that the photodissociation of ozone is strongly favoured by its interaction with water.’

‘This is exciting work linking together two of the new trends in atmospheric chemistry, multiphase chemistry and quantum calculations,’ says Mathew Evans at the University of York, UK, where he uses models to better predict the composition of the atmosphere. ‘We usually think about clouds as sinks for radicals, whereas this work suggests we should potentially start looking at them as sources.’

According to Dwayne Heard, an atmospheric chemist at the University of Leeds, UK, this is important since hydroxyl radicals are the dominant daytime oxidising species of greenhouse gases, such as methane, whose levels are continuing to rise. ‘More hydroxyl radicals means a globally shorter methane lifetime,’ he says, but concedes ‘the impact will depend on whether the radicals can escape the interface region to the gas phase, where it can oxidise trace gases, or remain trapped at the surface’.

Evans agrees. ‘These are theoretical calculations and they need to be assessed in both the lab and in the field but they highlight how the chemistry of the atmosphere can still surprise us.’