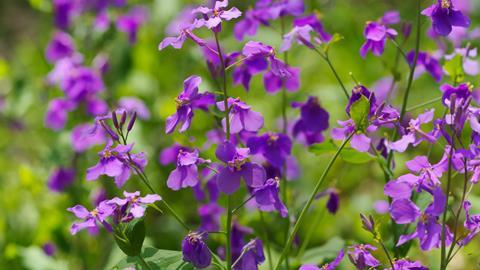 Two unusual fatty acids made by an unprecedented biosynthetic pathway have been discovered by chance in an ornamental flowering plant by researchers in the US and China.1 The researchers believe the fatty acids’ unique structure and synthesis could make them an excellent high-performance natural lubricant.

Unusual fatty acids frequently occur in plant seed oils and can be as long as 30 carbons – classified as very-long-chain fatty acids (VLCFAs) – with potential for applications in industry as biofuels and chemical feedstock. The seed oil of Orychophragmus violaceus, commonly known as Chinese violet cress, was found to contain two major 24-carbon dihydroxy VLCFAs that were synthesised by ‘discontinuous elongation’, a pathway previously unseen in fatty acid metabolism.

What’s surprising about these new fatty acids, compared with over 450 others that occur in plants, is how the 3-hydroxyacyl-CoA intermediate is prematurely pulled out of the cycle of chain elongation by a specialised enzyme, bypassing the final dehydration and reduction steps and the need for a complete cycle – hence ‘discontinuous’. The elongation intermediate then undergoes two more complete cycles to generate the final fatty acid with hydroxy groups in the 7 and 18 positions, the 7-hydroxy being a unique addition by the enzyme.

Edgar Cahoon and his team in Wuhan, China, and Nebraska, US deduced the structures of the fatty acids, named wuhanic acid and nebraskanic acid, using a combination of GC-MS and NMR; the former was key to identifying the presence of the two acids that went undetected by thin-layer chromatography (TLC). ‘What we noticed [in TLC] was the triacylglycerol and triglyceride component of the lipid extract wasn’t running anywhere close to where it should for an oilseed,’ explains Cahoon. This is unusual because a triacylglycerol band is normally characteristic of seed oils. Cahoon’s team only came across the fatty acids after special treatment and extended GC runs. ‘Early on we saw that the two major fatty acids, when analysed by GC, behaved very differently to common types of fatty acids,’ he adds.

‘It’s very good work. I think the biosynthetic pathway is quite solid,’ notes Sten Stymne, professor emeritus of the Swedish University of Agricultural Sciences, who co-authored an accompanying perspective on the research.2 ‘The fatty acids in this plant had not been previously reported in the literature as anything unusual so this is a lesson – it might be that screenings have missed other unusual fatty acids.’

Although Cahoon puts it down to ‘lucky observation’, the discovery of wuhanic and nebraskanic acid revealed a special property of the O. violaceus seed oil: it was an exceptional lubricant. The unusual fatty acids were responsible for giving the oil properties that far surpass those of the current market bio-lubricant castor oil.

Up to 50% by weight of the seed oil is wuhanic and nebraskanic acid but Stymne says the current yield of the fatty acids obtained is ‘disappointing’ since O. violaceus can’t be grown as an oil crop. Transgenic efforts have so far only managed to create seeds with 1% by weight of these fatty acids. ‘The idea is to be able to transfer the biosynthetic machinery from this non-economically viable plant into high-yielding oil crops to produce the fatty acids at reasonable cost and large volumes,’ he says.