‘Chemists are a strange class of mortals, impelled by an almost insane impulse to seek their pleasures amid smoke and vapour, soot and flame, poisons and poverty.’

This line from 17th century alchemist Johann Joachim Becher is frequently used by synthetic chemists to express their dedication and delight in practical work. Although a lot has changed since Becher’s day, chemists still spend a lot of time weighing solids and measuring liquids to make molecules and discover new reactions. ‘Chemistry is still a highly experimentally demanding discipline – you need to work in the lab to get results,’ says Cristina Nevado, an organic chemist at the University of Zurich, Switzerland. However, robots are starting to beat chemists at their own game. An automated flow reactor optimises a reaction in only one day – a task that might take a human chemists weeks or even months. Smart systems like the drug discovery robot Eve combine lab skills and artificial intelligence to test and modify a given hypothesis.

Chemists are hungry for change 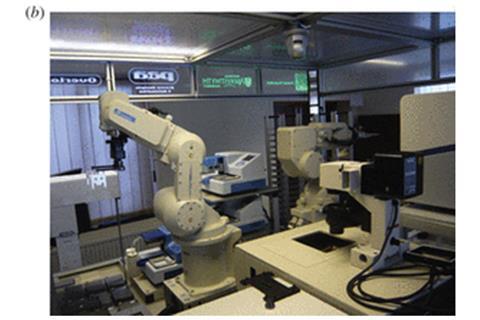 Eve has been designed to be flexible in terms of the biological assays that it can perform, and is capable of screening at a moderately high-throughput rate.

‘Chemists are hungry for change,’ declares Martin Burke from the University of Illinois at Urbana-Champaign, US. Having built a small molecule synthesiser, Burke is one of the scientists embracing automation and robotics – technology that might not only free chemists from some of the more tedious parts of their work, but completely change the way molecules are made. Eventually, Burke and others believe, advanced synthesis robots will entirely replace human lab workers.

Already, automation has played an important part in making small-scale synthesis more efficient. Descendants of Unimate, the first industrial robotic arm patented in 1961, now transfer vials and tubes into analytical machines or dispense amounts of liquid too small for human hands to handle. Over the last few decades, machines carrying out more sophisticated tasks like column chromatography have become affordable and widespread.

However, automating multistep synthetic procedures is less straightforward. For just a single reaction, liquids and solids might need to be added together or one after the other, might need to be heated, cooled, filtered, washed, extracted or evaporated. Each individual task is routine for a human chemist, but machines struggle to put all of them together.

Moreover, machines are still prohibitively expensive for individual labs and operating them often takes a lot of getting used to. ‘Automation has to offer a simplified tool so that the resistance to starting using it is not that high,’ comments Nevado.

Despite these hindrances, chemical synthesis made simple by a machine can be transformative to science. ‘There would be no molecular or synthetic biology without automated DNA synthesis,’ says Peter Seeberger, director of the Max Planck Institute of Colloids and Interfaces near Potsdam, Germany.

Oligonucleotide synthesis used to be a lengthy process that took a large team of skilled chemists. In 1965, Har Gobind Khorana published the first synthesis of an artificial gene in eight papers, totalling 400 pages. Perhaps rightly, people at the time thought that making synthetic DNA was little more than an academic exercise. 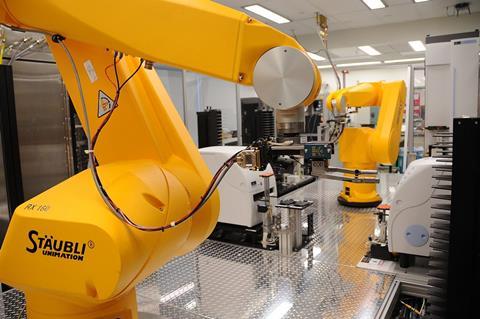 When the first gene was synthesised in the 1960s, few could have predicted how rapidly automation would contribute to DNA sequencing and synthesis technology

Today, however, making oligonucleotides is a straightforward process that is entirely automated. This allowed even scientists who lack a knack for chemical synthesis to make bespoke oligonucleotides and enabled DNA nanotechnology such as genetic circuits. Now, scientists are seriously considering constructing whole genomes from scratch – something unthinkable a couple of decades ago.

Two developments were key to automating DNA synthesis: the advent of solid-phase technology, introduced by Bruce Merrifield in the 1960s for making peptides, and Marvin Caruthers’ 1980 phosphoramidite method. Caruthers realised that the more steps a synthesis has, the more essential high yields become. His reaction, which adds one base to a growing DNA chain, typically has yields of close to 100%.

‘The key to automation is robust and reliable chemistry,’ remarks Seeberger, who has been working on automating carbohydrate synthesis – the only important biopolymer that has so far defied comprehensive synthesis. Unlike DNA and peptides, carbohydrates can be branched and every new linkage creates a new chiral carbon. Both regiochemistry and stereochemistry need to be carefully controlled – something many people thought would impossible.

After almost 20 years of research, Seeberger’s sugar synthesiser, as well as the building blocks needed to feed the machine, have just become commercially available. Recently, the machine assembled the longest synthetic oligosaccharide ever made.

One size fits all

‘We will need to be able to do at least the 30 to 35 reliable transformations the pharmaceutical industry uses to make compounds – and you might need more in the future,’ Seeberger says. Richard Whitby from the University of Southampton, UK, who leads Dial-a-molecule – a research network dedicated to making ‘synthesis of any desired molecule as easy as dialling a number’ – agrees. ‘There is huge scope for both new reactions and better reactions.’

Most chemists are not trained in computer science, and might feel scared about such aspects and perhaps a bit threatened

Burke goes one step further, proposing to focus efforts on finding one common synthesis that can make all molecules. ‘Most automation efforts have been predicated upon the assumption that each molecule requires a customised synthesis route. This is the way people have been thinking about it – try to develop machines that can do many different reactions,’ Burke says. ‘Our pitch is the opposite: let’s instead try to figure out how to make everything with one reaction.’

Burke’s team applied this idea in a small compound synthesiser centred entirely around palladium-catalysed couplings. Using up to four building blocks and an iterative sequence of coupling reactions, the synthesiser managed to prepare 14 different classes of small molecules, including fatty acids, polyketides, oligophenylenes and steroids. Burke estimates that given a larger arsenal of building blocks – around 5000 – the machine could make up to three-quarters of all 260,000 small natural products known to date.

Another advantage of automation, researchers agree, is removing human error and inconsistencies – a problem so great that 70% of researchers think science faces a reproducibility crisis. ‘For me, the biggest benefit of automation is not really the labour-saving side but the fact that it’s so much more repeatable and controllable,’ says Whitby.

‘I believe that in the next 10 to 15 years, the focus will be more on the data that’s collected from […] automated systems,’ agrees Coleen Robinson, former automation lead in chemical development at AstraZeneca. ‘Having access to a large quantity of reliable data will put us a huge step forward.’

Chemists will run their practical experiments remotely at synthesiser farms

In the future, Seeberger believes, chemists will share data and use pooled facilities like other scientists use supercomputers today. ‘Chemists will run their practical experiments remotely at synthesiser farms – the only people that work there make sure there’s always enough reagents and the machines run properly.’ This, he adds, will be possible in the next two to three years.

But ‘there’s technical and sociological challenges’, says Ross King from the University of Manchester, UK, who led the work on robo-chemist Eve. ‘Most chemists are not trained in computer science, and might feel scared about such aspects and perhaps a bit threatened,’ adds Mimi Hii a chemists at Imperial College London, UK. ‘People are still trained to do lab work manually.’

Hii leads Imperial’s Dial-a-molecule institute that will give researchers access to advanced automated equipment to train on and work with. Scientists’ feedback will then help the institute’s team to improve designs and work with vendors to bring next-generation machines to the market.

Researchers agree that automation will make their work more efficient. Chemists ‘could spend more time designing rather than doing’, imagines Nevado. ‘It changes the type of problems a graduate student could tackle in a three- to five-year period,’ Burke agrees. ‘It really ends up having a practical, empowering impact on what the field can do.’

Some people view chemistry as an art. I think this might be a barrier to people embracing automation

However, synthetic chemists’ current focus on lab skills might also make them hesitant to hand over all their practical work to robots. ‘Some people view chemistry as an art, and there are a lot of skills involved that people learn and hone,’ says Rachel Grainger, postdoctoral researcher at Astex Pharmaceuticals in Cambridge, UK. ‘I think this might be a barrier to people embracing automation.’

But automated procedures might also allow them to be scaled up and transferred from an academic to an industrial setting more easily. ‘There’s a disconnect between doing chemistry on a lab-scale, the creativity and the art of it, as opposed to process scale, where you need machines,’ Grainger adds. ‘People might spend a significant amount of time re-optimising a reaction for process scale that someone has done in the lab.’

Some scientists believe that, eventually, labs will be entirely run by robots. ‘One of the ambitions is to replace all the synthetic chemists from the lab by automated equipment, the way that we try to replace drivers from cars,’ says Hii. ‘Or even to support unmanned chemical synthesis in space exploration, for example. It’s not going to happen tomorrow, but maybe in the next 20 to 50 years.’

With robots making lab work obsolete in the not-too-distant future, should chemists be worried about job security? Quite the opposite, Seeberger says. ‘We train people to think about chemistry, not to do manual labour,’ he points out. ‘And to think and be creative, those are skills that are never going to be replaced by machines.’