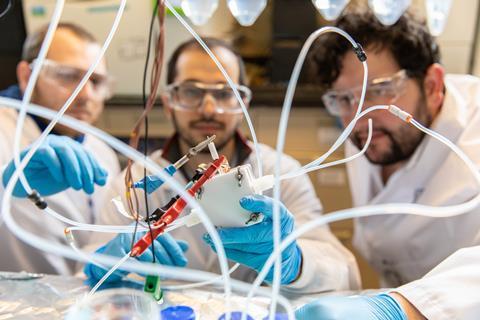 Adnan Ozden, Joshua Wicks and F Pelayo García de Arquer (left to right), with their new highly efficient Nafion-coated electrocatalyst that can convert carbon dioxide into chemicals such as ethylene and ethanol

A new catalyst is the fastest ever reported when it comes to converting carbon dioxide into simple chemical feedstocks. Key to this high efficiency is a polymer coating that enables better transport of carbon dioxide ­to the electrode surface.

Carbon dioxide electrolysis offers a way to convert a greenhouse gas into useful products, like fuels and chemical feedstocks. It’s a fast developing field, with scientists aiming to drive the technology towards commercial uses, hopeful that it can reduce our reliance on fossil fuels.

Among the most important goals for carbon dioxide electroreduction researchers are the creation of catalysts that are highly active – transforming carbon dioxide into other products as quickly and efficiently as possible. This is essential if the process is to become practical for large-scale use.

Now, researchers in Canada and the US have used a special ion-transporting polymer coating, known as an ionomer, to significantly increase their electrocatalyst’s activity and produce useful chemicals such as ethylene and ethanol from carbon dioxide.

‘We found one of the limitations of the way we transform carbon dioxide electrochemically is the very limited reaction volume where carbon dioxide, electrons and water – which is required as a proton source – meet,’ says University of Toronto researcher Pelayo García de Arquer, who led the project. To tackle this issue, García de Arquer and his colleagues turned to a material widely used in fuel cells for its conductive properties, the ionomer Nafion. 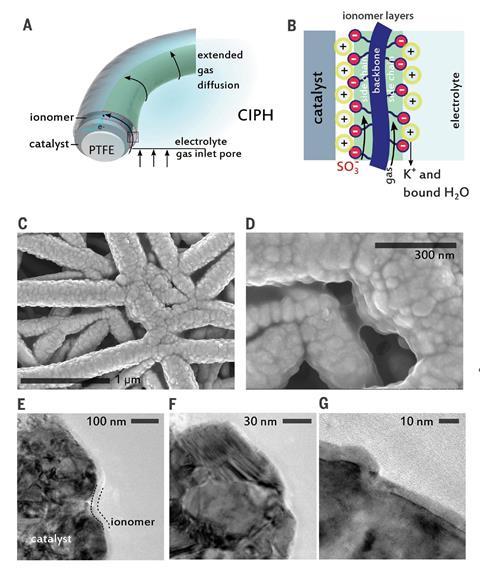 Coating the catalyst in the ionomer Nafion allows the carbon dioxide to penetrate deeper into the catalyst, increasing the number of active sites available

Nafion is amphiphilic, meaning it has both hydrophilic and hydrophobic functional groups. When it is deposited on the surface of the copper catalyst it takes on a layered arrangement with distinct hydrophobic and hydrophilic regions. ‘Carbon dioxide can travel through the hydrophobic domains better than it could travel through water electrolytes, for example,’ explains García de Arquer. ‘The resistance to carbon dioxide transport is less – so carbon dioxide can reach more reaction sites on the catalyst surface, enabling conversion at faster rates.’ Meanwhile, the hydrophilic layers enable water uptake and ion transport.

The Nafion coating creates a layer called a catalyst:ionomer planar heterojunction (CIPH). The CIPH structure extends the interface where gas, ions and electrons meet from tens of nanometres from the catalyst surface, to several micrometres. This allows the catalyst to achieve much higher current densities.

‘Three years ago, the current densities of carbon dioxide electroreduction were in the range of tens of milliamps per cm2, and now in this work we demonstrate operating currents in excess of 1A/cm2,’ says the project’s co-lead Cao Thang Dinh, who is now based at Queens University in Kingston, Ontario. ‘And we’re excited about this because these now fold in the regime of other more mature technologies, such as water electrolysers or fuel cells.’

Having achieved high current densities, the Toronto team are now looking to improve their electrolyser technology on a number of different fronts, explains García de Arquer. ‘One very important aspect is we need to improve the stability of the systems, which are now stable for tens of hours – but this is still far from the required stability benchmarks of industry, which are thousands of hours,’ he says. The group also aim to apply their findings to catalysts that can produce more complex and valuable chemical products, and further develop methods to reduce the energy input needed for the systems.