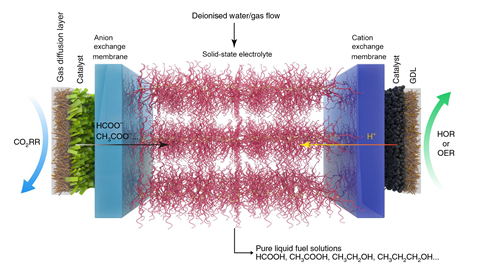 Solid ion conductors transport electrogenerated cations or anions to form pure products, avoiding mixture with solutes, as in the case with a conventional liquid electrolyte

Researchers in the US and Saudi Arabia have developed electrocatalytic cells that turn carbon dioxide into pure liquid fuels and feedstock chemicals, including formic acid, ethanol and propanol. The approach could offer a cheap and sustainable alternative to fossil fuels by obtaining valuable chemicals from carbon dioxide waste streams.

The electrocatalytic reduction of carbon dioxide into fuels and chemical feedstocks has gathered interest in recent years for its potential to achieve a sustainable, carbon-neutral energy cycle using renewable energy. But while eletrocatalytic approaches exist to convert carbon dioxide into useful chemicals, they usually involve liquid electrolytes that deliver the desired product in a mixture with unwanted dissolved salts. Separation can be done, but it’s expensive.

Now, a team led by Haotian Wang at Rice University has created a carbon dioxide reduction cell that uses a solid electrolyte instead of a traditional liquid one. The upshot is that pure products can be made directly with no undesirable salts, removing the need for costly separation processes. ‘We can significantly reduce the cost of carbon dioxide reduction to liquid fuel solutions without the need for product purification,’ says Wang.

The team’s electrocatalytic cells comprise an anode and cathode at either end, each made up of gas diffusion layers that are coated with a catalyst. Next to each electrode is a membrane that only allows either cations or anions to pass through into the solid electrolyte that is sandwiched in the middle. The electrolyte consists of ion-conducting polymers with different functional groups, over which they flow deionised water or inert gas to collect the product in solution or as a vapour.

The researchers first focussed on producing formic acid (HCOOH) by developing an atom-thin, two-dimensional bismuth catalyst. This efficiently reduced a supply of carbon dioxide into formate anions (HCOO-) on the cathode side of the cell. Meanwhile, the anode side of the cell was circulated with sulfuric acid solution to generate hydrogen cations (H+) via water oxidation. The resulting anions and cations were conducted into the solid electrolyte layer where they joined to form a pure solution of formic acid, the concentration of which depended on the flow rate of deionised water or gas.

‘When we first smelled the sour odour of formic acid coming from our device, we were really excited to know that it worked,’ says Wang. The team went on to show that the cell could run continuously with no stability issues for 100 hours to produce 1.6 litres of 0.1M pure formic acid. What’s more, by switching to a copper catalyst the researchers demonstrated the system’s ability to make other products including ethanol, acetic acid and propanol. ‘We hope to extend this technology to many other electrochemical processes beyond carbon dioxide reduction in real practice,’ says Wang.

‘This work is a significant advance in the field of carbon dioxide electroreduction,’ comments Feng Jiao who investigates electrocatalysis and carbon dioxide reduction at the University of Delaware in the US. ‘It provides the community with a promising solution to address challenges in product separation, a costly process in particular when the product stream is highly diluted.’