Optogenetic control puts biosynthesis into – and out of – the spotlight

Scientists have come up with a bright idea for simply engineering microbes to overcome the difficulties of balancing enzyme pathways used to make useful chemicals. Introducing an ‘optogenetic circuit’ means that brewer’s yeast switches from a fermentation that makes ethanol as normal in light to one that gives the biofuel candidate isobutanol in darkness. And by doing so, the scientists produce isobutanol concentrations five times greater than previously achieved by yeast strains. 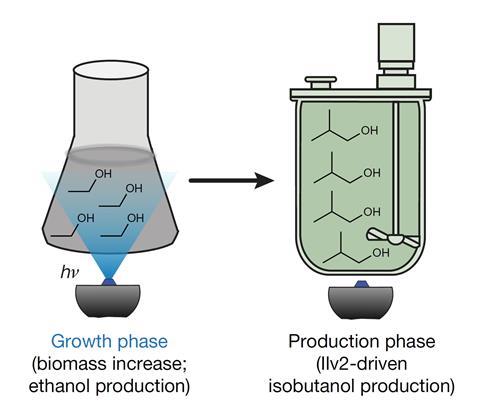 Yeast were engineered so that light could be used as a switch to control and optimise production of isobutanol, a potential biofuel

The Princeton scientists thought optogenetics, which exploits light-sensitive transcription factors to turn particular genes on or off, might help avoid that effort. Other researchers often combine the approach with fibre-optic light sources to change the activity of rat neuron proteins. Avalos and his team realised that light-activated genes might allow them to keep yeast in the light to build up precursor substances needed to stay healthy and work quickly. They could then switch the fermentation into the darkness when production conditions are best.

Avalos and his colleagues inserted a light sensitive transcription factor from marine bacteria into yeast that could start protein production from particular genes when illuminated. By combining it with a second gene, which produces a protein that can block transcription factors, they also created a system that could switch off genes when illuminated.

That offered solutions to challenges central to engineering yeast to express the enzyme acetolactate synthase (Ilv2) needed to make isobutanol. Isobutanol is toxic to yeast, and Ilv2 consumes the pyruvate precursor molecule used in ethanol fermentation. Scientists have therefore considered removing the pyruvate decarboxylase 1 (Pdc1) enzyme that consumes pyruvate to make ethanol. However, that’s hard because Pdc1 recycles the oxidised form of the nicotinamide adenine dinucleotide (NAD+) intermediate that yeast uses in consuming glucose and growing.

The Princeton team therefore made yeast turn on the Pdc1 gene that leads to ethanol and turn off the Ilv2 gene when illuminated. ‘When you switch the light off the essential pathway turns off and this toxic pathway turns on,’ Avalos says. Then, when yeast has consumed all the NAD+, periodic pulses of light briefly turn Pdc1 back on, replenishing the supplies needed for their yeast to chew up glucose and spit out isobutanol. 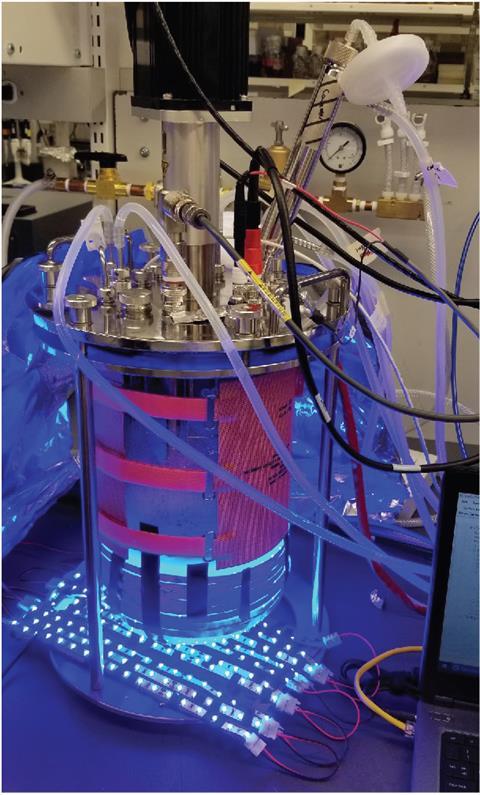 Fermenting yeast in blue light ensures that it grows healthily, and with enough NAD+ to then power isobutanol synthesis in a darkened reactor

Shining blue light on the yeast in a fermenter containing a glucose solution, the Princeton team made around 8.5g of isobutanol per litre. That’s five times the highest concentration previously reported academically, and helps resolve doubts about getting light to yeast cells in the middle of big, cloudy, biosynthesis reactors, Avalos notes. But it’s still only around 54mg of isobutanol per gram of glucose fed to the yeast, which he admits is not enough to be economically viable.

Raman Vaidyanathan from the University of Sheffield says it’s notable that the system ‘is not just an on–off switch, but one that can be used to get different levels of expression, offering fine-tuning capacity’. ‘The authors have managed to show that the switch can work even at relatively low light intensities and high cell densities,’ he adds.

Jörg Pietruszka from the Jülich Research Centre in Germany calls the concept of optogenetic control ‘compelling’, but highlights the practical and economic challenges. ‘Light is a powerful tool for regulating metabolic pathways, as has been demonstrated in a number of optimisation studies,’ he says. However, getting to production scale ‘is a different matter’ he says, although the largest five litre photo-fermenter Avalos’ team uses ‘is an intriguing step into the right direction’. ‘The economic feasibility of light-controlled isobutanol production needs to be tested in the future,’ Pietruszka says.

That’s one of several things that Avalos now wants to try. ‘We want to further improve the strain genetically and optimise the light schedule,’ he says. He also wants to make other chemicals, and perhaps integrate biosensors that will automatically feedback when to switch between enzyme pathways.