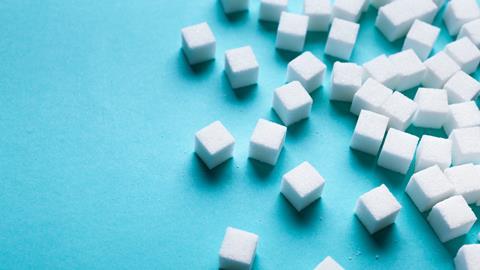 This week prepare to be energised. Here's Phillip Broadwith.

Do you have a sweet tooth? Do you crave cakes, desserts, sweets and sugary drinks? While these foods certainly won't keep you on good terms with your dentist, they will mean that you should have plenty of energy, since sugars - and particularly glucose - are some of life's most universal sources of energy. 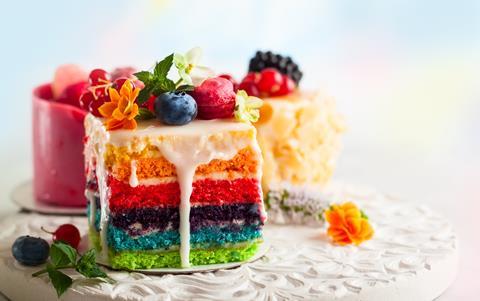 The term 'sugar' in a scientific context refers to a huge family of molecules, part of an even larger family known as carbohydrates. As the name suggests, carbohydrates are molecules that contain a good deal of carbon that is also 'hydrated' in some way. In practice this generally means they are strings of carbon atoms bearing multiple hydroxyl, or OH groups.

Sugars are at the simpler end of the carbohydrate spectrum, typically containing three to six carbon atoms. The arrangement of hydroxyls along the carbon chain dictates precisely what kind of sugar it is. The white, crystalline powder that we would commonly refer to as 'sugar' is more properly called sucrose, and is made up of two different simple sugars, glucose and fructose, joined together. More complex carbohydrates like starch and cellulose are made from lots of sugar molecules joined in long polymer chains. 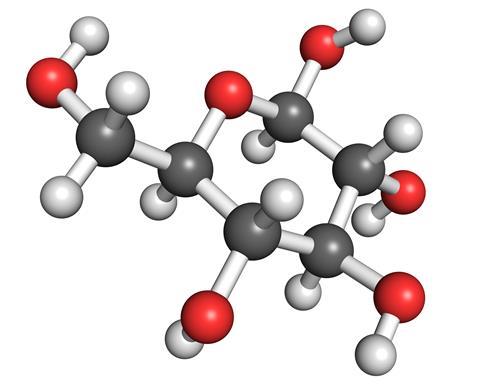 But the most common sugar is glucose. It is a six-carbon sugar, and can take on several different forms. The simplest is a straight chain, with an aldehyde at one end, and a single OH group attached to each carbon of the chain. However, glucose is more usually found in its cyclic forms, where one of the OH groups from the tail end of the molecule has curled around and reacted with the aldehyde to form either a five- or six-membered ring. The six-membered ring is the most stable form, but in solution all three are in equilibrium.

For reasons scientists are likely to debate for many years to come, life has evolved around glucose as its primary energy source. It is used by most organisms, from bacteria to humans. To extract the energy stored in glucose, it must be metabolised or processed. This is done by a series of enzyme-catalysed chemical reactions, the overall outcome of which is to convert the glucose into carbon dioxide and water, just like burning it would do. However, rather than the uncontrolled release of energy as heat and light that burning gives, metabolism produces adenosine triphosphate, which is the molecule used to transfer energy in biological systems. If insufficient oxygen is available to fully oxidise the sugar, it is converted instead into lactic acid in animals or alcohol in yeasts and bacteria - a process that has been exploited by brewers and winemakers for centuries.

As glucose is such an important molecule biologically, its levels within our body must be tightly controlled - too little glucose in your blood, or hypoglycaemia, can quickly lead to unconsciousness or even death, and excess blood sugar can be equally problematic. This control is enforced by two hormones, both secreted by the pancreas. Glucagon stimulates the liver to break down glycogen, which is a polymeric carbohydrate used as a short-term store of glucose, and this raises blood sugar; whereas insulin has the opposite effect, causing excess blood glucose to be stored up as glycogen in the liver and muscles. 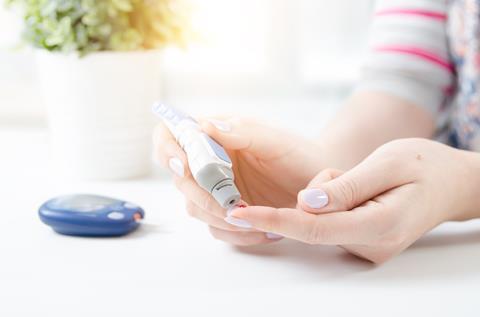 If your body fails to produce insulin, or does not react properly to the insulin it does produce, then you have diabetes. Type 1, or insulin dependent diabetes, requires patients to inject themselves with insulin every day, but to know how much they must inject, they need to have an idea of their blood glucose level. This has necessitated the design of ever more accurate and easy to use personal blood glucose monitors. The patient must prick their finger and soak a drop of blood onto a paper testing strip, which is then inserted into the meter.

The strip is impregnated with an enzyme called glucose oxidase, which oxidises the aldehyde end of the glucose molecule to a carboxylic acid, making gluconic acid. This oxidation transfers electrons to the enzyme, which in turn are offloaded onto an iron-based ferricyanide complex - also absorbed in the paper - reducing it from iron(III) to iron(II). The amount of iron(II) can be detected electrically by the meter and converted into a blood sugar reading and an indication of the required dose of insulin.

Since glucose is the only form of stored energy that crosses the blood-brain barrier, it really is brain food. So the next time you feel the need to justify that extra bit of cake, have a good hard think - maybe about a difficult chemistry problem. You'll burn off the calories in no time.

Perhaps a textbook on quantum physics as your coffee table book then, to make room for that extra bit of cake. Certainly food for thought. That was Chemistry World's Phillip Broadwith, with the sweet, energetic chemistry of glucose. Now next week, a compound with a good and bad side.

As you might expect from anything capable of hardening skin and softening bones, formaldehyde is very much a 'handle with care' type of chemical. It may have been a less harmful alternative to the toxic heavy metals used by embalmers in the 19th century, but that didn't make it by any means safe. Besides the nasty smell, eye irritations and dermatitis, it's now classified as a carcinogen by the International Agency for Research on Cancer. Long term studies suggest that those exposed to formaldehyde on a day-to-day basis, including mortuary workers and anatomists, face a higher risk of leukaemia and certain cancers.

And to find out the chemistry that makes this rather dangerous compound so useful, join Hayley Birch in next week's Chemistry in its element. Until then, thank you for listening. I'm Meera Senthilingam.