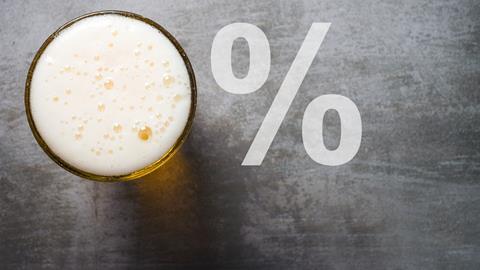 Explainer: how do you make non-alcoholic beer and wine?

For Dry January and beyond, drinkers are thirsty for beers and wines that don’t get you drunk

Many people will have met the New Year with a resolution to lay off the booze for a while, perhaps having overindulged in previous weeks. And with research published in early January revealing how alcohol causes DNA damage,1 drinkers have even more reason to abstain. As part of its Dry January initiative, the charity Alcohol Concern offers tips on resisting temptation, such as plumping for one of the increasing number of ‘dry’ versions of alcoholic products that offer the flavour of beer and wine without the alcoholic overhead.

Far from it. The key to making alcoholic drinks is using yeast to convert sugar to ethanol, and the by-product molecules that yeasts make at the same time are essential to a drink’s character. So while some of the flavours that drinkers enjoy come from the plants that provide the sugar, it’s the fermentation process that really determines how drinks taste.2 Consequently, low-alcohol wine, beer, or even spirits, all involve yeast biochemistry.

So how do you get the tasty flavour chemicals without the alcohol?

Beer brewers most commonly make low alcohol options through partial or limited fermentation. For example, they can have a very short brew time by removing or killing the yeast early in the process. Alternatively, brewers ferment at low temperatures because under such ‘cold contact process’ conditions yeast converts sugar to alcohol more slowly, while still making the important flavour molecules like esters and longer-chain alcohols. Both beer and wine makers can also start from a liquid with less sugar, or fewer of the other nutrients that yeast needs. Reduced alcohol white wine producers can add enzymes to juiced grapes, for example, which converts glucose to gluconic acid that yeast can’t digest. In some cases companies have also made low alcohol wine by just diluting regular wine with water or fruit juice.

But there’s still some alcohol there, right? Where does the zero alcohol stuff come from?

For zero alcohol versions, producers would typically make the drink much as normal, and then separate out the ethanol. For example, heating the liquid will drive off the ethanol. However, this can also trigger the Maillard reaction, which can damage a drink’s flavour. So, rather than just boiling ethanol off some approaches use a vacuum to help remove it at lower temperatures. Winemakers often use ‘spinning cone columns’, where liquid flows over a succession of alternating rotating and static cones, increasing the surface area from which alcohol can evaporate.3 However, all evaporative methods need at least a little heat, so many producers use membranes to do dialysis or reverse osmosis at even lower temperatures. For example, they can push the wine or beer through a finely porous membrane, which allows the alcohol and water to pass through but leaves the remaining larger substances behind to be rediluted with just water later. Yet, there can be a hitch with this process too, as in some countries it’s illegal to add water to wine prior to sale.

It just doesn’t taste the same though does it? They seem a bit flavourless – why is that?

Many of the important flavour molecules are just as volatile as ethanol, so evaporating off ethanol inevitably risks losing a lot of these fruity esters, or hoppy long-chain alcohols as well. Therefore most evaporative processes try to capture at least some of them, and re-inject them to the drinks later. Manufacturers are also getting better at minimising flavour loss, and membrane-based processes should mostly avoid this problem. A more fundamental issue is that ethanol itself is thought to be an important contributor to flavour, for example in a wine’s ‘body’. That may be down to alcohol’s mouth-puckering astringent effect, which you can feel rather than taste, and therefore is hard to replicate.

Why do some low alcohol beers have a weird funky taste?

A key downside affecting cold contact and other low-alcohol brewing methods is that the beers they produce often have a ‘worty’ smell. The name refers to the sugary mixture brewers make by heating malted barley, or malt, in water. The wort feeds the yeast and it contains various potent odour molecules, including the branched aldehydes 3-methylbutanal, 2-methylbutanal, and 3-methylpropionaldehyde. Fermentation normally reduces these to alcohols, but cold contact processes can leave around a third of them in the final beer. However, using dark or pale caramel malts rather than pale malts improves the taste, wort and all. That’s probably why the makers of one of the UK’s leading low-alcohol ales uses ‘a patchwork of 8 different types of speciality malts’.

Are low alcoholic options really all that drinkable?

They work well for many people. In Spain, the largest market for low-alcohol beer in Europe, such products make up around 10% of overall beer sales. In the Czech Republic there are around 30 varieties of low alcohol beer. And their popularity is growing: market research group Technavio forecasts that the worldwide non-alcoholic drinks market will grow at 9% per year on average through to 2021, compared to 4% for the overall alcoholic drink market. People are getting used to low-alcohol drinks, and it therefore seems likely that they will get tastier as companies compete for this expanding business.