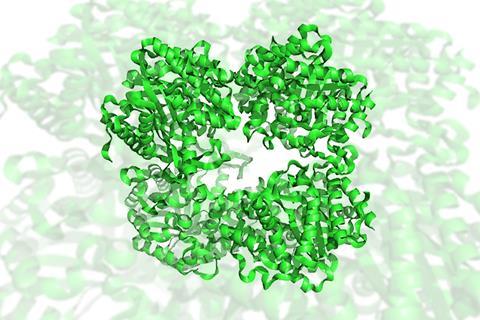 A natural enzyme has been tweaked so that it can function in scalding hot ionic liquids rather than water. As a result the enzyme can breakdown cellulose into glucose 30 times faster than previously possible offering a quick way to turn biomass into valuable sugars for fuel or chemicals.1

The challenges of generating energy from renewable resources are well known, but the chemical industry also relies on fossil fuels for feedstock. In an effort to wean humans off fossil fuels, chemists are increasingly focused on producing these platform chemicals from renewable resources. However, first-generation biofuels and bioplastics require food-grade sugars as feedstocks, setting up a ‘food versus fuel’ dichotomy.

Several natural organisms – mainly fungi – produce enzymes that convert cellulose into glucose. This offers the potential to break down inedible, woody biomass. Chemical engineer Jason Hallett of Imperial College London, UK, says typically efforts to breakdown cellulose proceed in a slurry of biomass and aqueous enzymes, which slows the process down considerably as cellulose is insoluble in water. Furthermore, if the water is heated to speed up the reaction the hydrogen bond network falls apart and the enzymes denature. The reaction therefore has to be run well below 100°C.

In 2003, inorganic chemist Robin Rogers and colleagues at the University of Alabama in the US found that cellulose could be dissolved in ionic liquids2 – salts with melting points below 100°C. Unfortunately, the solvents also deactivated the enzyme used to digest cellulose. ‘We suggested you’d have to find another enzyme or create an enzyme that worked within the ionic liquid,’ says Rogers.

In new research, Hallett and colleagues at Imperial College took up the latter challenge. In nature, cellulose is broken down by first cleaving the insoluble polymer into soluble sugar chains and then breaking these sugar chains in to the monomer. Each process requires a separate enzyme and Hallett’s group had planned to modify versions of both to work in ionic liquids. They started with β-glucosidase, which can breakdown sugar chains into its monomers. ‘Basically, we’ve coated the enzyme in a protective layer that keeps the ionic liquid away from the surface of the protein, so it doesn’t cause it to denature,’ explains Hallett.

The increased thermal stability of the ionic solvent, relative to water, allowed the researchers to run the reaction at much higher temperatures without denaturing the enzyme, and therefore to achieve much higher activity. At 110°C, for example, the researchers achieved 30 times the activity they did at 50°C.

There was also an unexpected bonus: when the researchers added their modified version of β-glucosidase to the ionic solvent, they found that it decomposed the dissolved cellulose without needing another enzyme. ‘β-glucosidase doesn’t have the ability to bind substrates that are not dissolved, so the only way to even test the activity of β-glucosidase on polymeric cellulose was to dissolve both in the same solvent,’ explains Hallett. ‘If you do that in water you can’t dissolve the cellulose; if you do that in any solvent that dissolves cellulose the enzyme will denature. It was only once we were able to protect the enzyme against non-aqueous environments that this activity could even be tested.’ Hallett believes similar enzyme modification techniques could be useful for recycling synthetic polymers that are not water soluble.

‘I find this approach to be very innovative and a great example of the power and impact of enzyme optimisation coupled with process development,’ says Blake Simmons of the Joint Bioenergy Institute in the US. ‘In particular, the chemical modification of the enzymes to increase thermal stability above the boiling point of water is a truly remarkable achievement.’

Rogers agrees, and notes that all the main biopolymers in woody biomass can dissolve in ionic liquids. ‘Imagine – you could take a tree or a grass and put it in a beaker with ionic liquids,’ he says. ‘If you had a cocktail of enzymes specific to each one of those polymers that also dissolved and remained active, all of a sudden you’d have a huge bioreactor where you saved so many energy- and chemical-intensive steps to get to chemicals from lignocellulosic biomass that it’s just amazing.’