Peptide glue may have held first protocell components together 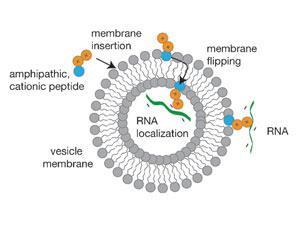 Electrostatic interactions induced by short, positively charged, hydrophobic peptides are all it takes to attach RNA to vesicle membranes. The discovery provides new insight into how RNA and membranes could have come together to form protocells – precursors to life – 4 billion years ago on Earth.

RNA is assumed to be the ancestral nucleic acid in early cells because it can store genetic information and also catalyse chemical reactions. Membranes are also thought to have played an important role in prebiotic chemistry, not only trapping nucleic acids inside vesicles but also promoting a variety of processes by co-localising reactants on their surface. The physical association of RNA with vesicle membranes may have been a significant event in early cellular evolution. Determining simple and prebiotically possible ways through which RNA and membranes can associate is therefore an important part of understanding how early cells may have formed.

Nobel laureate Jack Szostak and his team at the Massachusetts General Hospital in Boston, US, found that peptides just seven amino acids long or fewer can localise RNA to a basic cell membrane. ‘This mechanism is really quite simple and has been used in other fields to form RNA complexes with a variety of materials,’ says Neha Kamat, the first author of the paper. ‘The simplicity of our system is what makes this mode of RNA-membrane association seem plausible on a primitive Earth.’

The authors used small peptides containing both a hydrophobic group that associates with the membrane and a cationic group that electrostatically interacts with the negatively charged phosphate groups of RNA. Kamat explains that such peptides could have been present on the prebiotic Earth and may have helped to bring RNA and membranes together. ‘The peptides essentially act as a kind of glue to bind membranes and then attract and hold the RNA at the membrane surface,’ she says.

‘The manuscript provides original data, opening a novel branch in origin of life research,’ says Uwe Meierhenrich, who works on prebiotic evolution at the University of Nice, France. ‘The applied experimental techniques have been adapted to both dynamically characterise the vesicles and allow the binding of specific molecules on the vesicular surfaces. This is not a trivial task.’

The authors measured the charge at the surface of the vesicles and performed selective fluorescence resonance energy transfer and microscopy studies to probe RNA-membrane association. Kamat agrees that the most demanding part of the work was to develop suitable assays to do this.

‘The first forms of life were likely to be simple cells containing systems of peptides and short strands of a nucleic acid such as RNA,’ explains David Deamer, a chemist who works on membrane evolution at the University of California, Santa Cruz, US. ‘The results provide significant insight into the way that protocellular systems could have spontaneously assembled on the prebiotic Earth 4 billion years ago, an essential first step toward the origin of cellular life.’