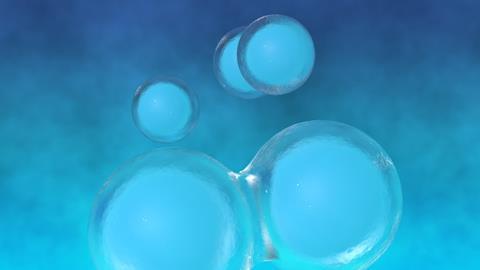 The question of how reproduction arose at the dawn of life has long puzzled origin of life researchers. Without the ability to reproduce living cells can neither create offspring nor be subject to evolutionary pressures to pick ‘winners’ for the environment they inhabit. A new model suggests that incredibly basic ‘protocells’ – which wouldn’t even be defined as life – could have arisen and produced daughter protocells that can grow and divide too. This model hasn’t been put to the test yet but, if successful, it could potentially help unlock one of the key riddles surrounding the chemical origins of life.

The cell is a sophisticated molecular machine honed by generations of evolution to perform numerous functions. However, for a cell to be able to evolve it must be able to reproduce before natural selection can take place. So how did the first cells evolve? Evolutionary biologists and others have studied various simple ‘protocells’ that might perform the essential functions of a cell. One popular idea, proposed independently by John Haldane and Aleksandr Oparin in the 1920s, is that microdroplets formed by coacervation – electrostatically driven phase separation in a liquid – could have provided membrane-free microreactors, holding together the necessary chemicals and preventing them from diffusing away. Recently, it was even shown that primitive protocells could be predatory, consuming other protocells and fortifying themselves with their unfortunate victim’s constituents.

Liquid droplets do not normally reproduce, however: larger droplets grow by taking up material from a supersaturated background solution or from smaller droplets, which leads to a decrease in the number of droplets. In 2015, however, biophysicist Frank Jülicher of the Max Planck Institute for the Physics of Complex Systems in Dresden, Germany and colleagues showed that droplets maintained away from thermodynamic equilibrium by an external energy supply can stably coexist at an equilibrium size. In the new research, they show that, under certain conditions, such droplets can divide and grow.

The researchers mathematically modelled a droplet of an arbitrary chemical B suspended in a supersaturated solution of B that also contains a lower-energy chemical A. The decomposition of B into A occurs spontaneously, while the reverse reaction requires an external energy source – on the early Earth, this could have been a chemical fuel, radiation or a temperature gradient such as those found at hydrothermal vents on the sea floor. Inside each droplet, B breaks down to A, which dissolves into the background fluid – this would reduce the droplet size. Outside the droplets, A is turned into B, which is incorporated into the droplet – acting to increase the droplet size. If the solution is moderately supersaturated, droplets reach a stable equilibrium size dependent on the degree of supersaturation, and the surface tension keeps the droplets spherical.

If the supersaturation gets too high and the droplets grow too large, however, the spherical shape becomes unstable: ‘If you grow a little mountain somewhere because more material arrives, the tip of the mountain receives more precipitation that the valley,’ explains Jülicher, ‘So the mountain grows more than the valley’. The droplets elongate along one axis and eventually divide into two or three ‘daughter’ droplets which, being smaller, return to a spherical shape. These daughter droplets also incorporate B from the background solution and grow until, eventually, they become unstable and divide themselves, forming ‘granddaughter’ droplets. The team are now talking with experimentalists with a view to testing this idea.

Jülicher speculates that, on the early Earth, a possible candidate system could have been RNA-carrying droplets. ‘What corresponds to the chemical reaction is polymerisation of RNA and degradation of RNA into some components. One has then to provide conditions from which RNA can be re-polymerised.’ If a suitable reaction to copy RNA could be found, says Jülicher, natural variations in the chemical environment could introduce variation among the droplets and make them subject to natural selection. They also suggest that the droplets might provide a route towards the evolution of a cell membrane, as amphiphilic molecules could have been naturally attracted to the droplet surface. In future, the researchers would like to create multiple different kinds of interacting droplets: ‘One could imagine co-existence of different types of droplets in such a way that molecules produced by one type of droplet are needed for the reaction to produce the material of the second type of droplet, so then you would have a sort of ecosystem,’ says Jülicher.

Evolutionary biologist William Martin of Heinrich Heine University of Düsseldorf, who advocates the idea that life originated in pores in hydrothermal vents, says: ‘It’s not clear to me what real biological system based on observations from nature that this might be emulating,’ However, he adds: ‘If we assume that hydrothermal vents provide a system of organic micro-compartments, and that these have collected hydrophobics, then it’s certainly imaginable that there might have been properties of these droplets in the aqueous phase within a hydrophobic phase that might have been relevant. You never know.’