Photosynthetically-active artificial cells could be just around the corner now that scientists in the UK have successfully trapped chloroplasts inside microdroplets and shown that these membrane-free protocells are capable of light-induced electron transport.

Stephen Mann and his team at the University of Bristol started with mixtures of poly(diallydimethylammonium chloride) (PDDA) and carboxymethyl-dextran (CMDX). In aqueous solution, PDDA and CMDX spontaneously assemble into polymer-rich liquid microdroplets through an electrostatic process. The droplets’ surface potential allowed them to sequester and retain intact plant chloroplasts. 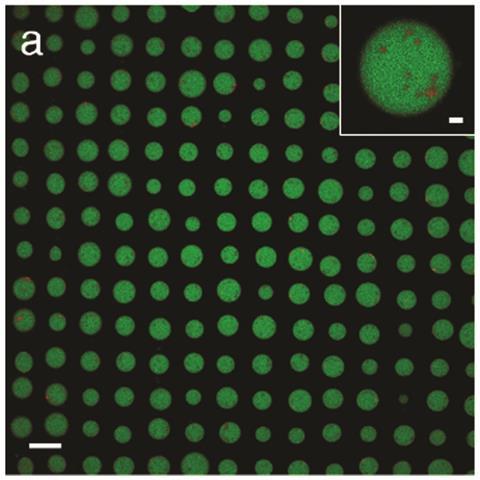 To confirm that the chloroplasts could still function, Mann’s team used the Hill reagent, 2,6-dichlorophenolindophenol (DPIP). Hill reagents act as artificial electron acceptors and change colour when reduced. On exposure to light, DPIP went from blue to colourless, confirming that the electron transport chain from photosystem II to photosystem I still worked.

The team also acoustically patterned the microdroplets onto a glass substrate. They say that the ability to produce uniform arrays of isolated chloroplasts might provide a route to photosynthetically-active microchips for biomimetic water splitting.