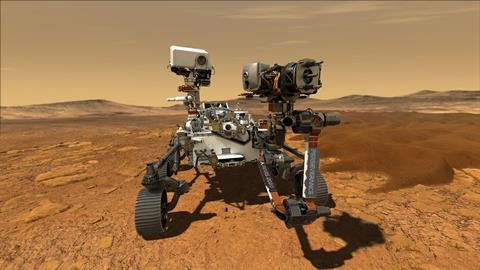 Nasa’s Perseverance rover has uncovered new details of the geochemistry of the Jezero crater on Mars. A series of articles published in Science and Science Advances explain how data collected by the rover’s on-board instruments offer insights into the volcanic history of the red planet. 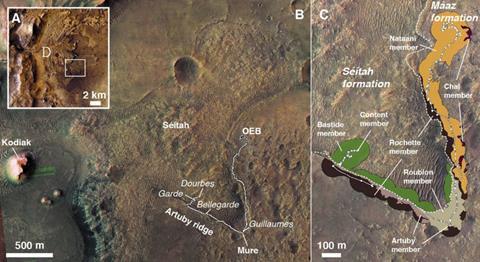 The new research provides information on the chemical make-up of rocks reaching down to a depth of 15 metres below the surface of the crater floor. The material is mainly made of an igneous mineral called olivine, and is layered by density and composition. The igneous composition of the rock reveals its volcanic origins, while the layering suggests that the material was repeatedly exposed to liquid water.

The lowest exposed geologic feature in the crater, known as the Séítah formation, was found to be predominantly composed of coarse crystalline olivine, while iron and magnesium carbonates detected in the material indicate reactions with carbon dioxide-rich water. The rocks also contain sulfates and perchlorates, which researchers believe were introduced later by evaporation of salt-rich water.

Samples of the rock have been stored on the rover in the hope that they may be brought back to Earth for closer inspection by a future Mars mission in the 2030s.