Scientists have made a battery that can be directly charged in sunlight without needing an external solar panel. Clever design of the battery electrodes facilitates photo-rechargeable zinc-ion batteries that could find applications as cheap devices for off-grid solar farms.

Solar energy is often stored in rechargeable batteries for later use. Currently, this process requires separate solar cells to harvest the energy, and batteries to store it. Now, a team led by Michael De Volder from the University of Cambridge in the UK has engineered a battery cathode that can take the place of the solar cell and recharge the battery without requring an external energy harvester. 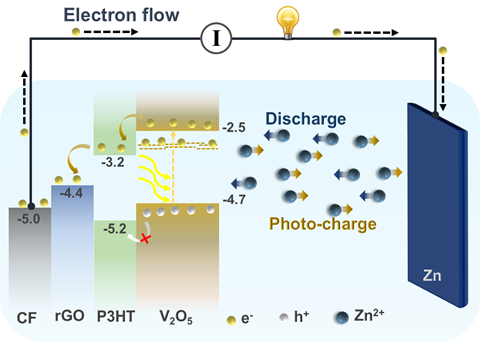 The energy levels of P3HT and graphene oxide can support the transport of photo-excited electrons from V2O5 nanofibers to the current collector. On the other hand, unpaired photo-induced holes are blocked by P3HT and accumulate in the photo-cathode

‘The idea stems from when we saw that perovskites, which are used in a lot of solar cells, were starting to be used in batteries. We decided to try and join both things together, but the problem that we encountered was stability. The batteries we made at the time had low efficiencies and were only able to cycle about 10 times before losing most of their functionality,’ explains De Volder. ‘We had to rethink whether we could use more stable materials to achieve a similar functionality and that’s where we started moving towards zinc-ion batteries.’

Zn-ion batteries are emerging as a promising and cost-effective alternative to Li-ion batteries. While Zn-ion batteries have a lower energy density, they are more stable than their Li-based counterparts, can work using aqueous electrolytes and are considerably cheaper, making them ideal for use in off-grid applications for rural communities.

‘Everyone knows about the importance of access to fresh water, food and information, but actually energy and electricity are also very important for developing countries to have better access to,’ comments De Volder. He hopes that these photo-rechargeable batteries may help combat energy poverty and is currently in talks with international collaborators to test the devices in solar farms under real-life conditions.

‘This is a very exciting development demonstrating simultaneous energy harvesting and storage in a single device,’ says Serena Corr, who researches functional inorganic nanomaterials for battery applications at the University of Sheffield in the UK. ‘This elegant design cleverly incorporates solar energy harvesting and charge storage on the cathode, taking advantage of a nanostructured arrangement that promotes efficient charge-carrier transport, resulting in higher photo-conversion efficiencies than previously reported.’ 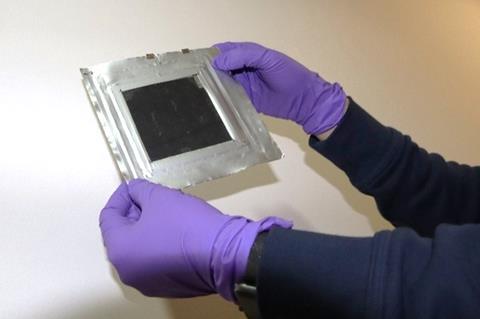 The photo-rechargeable cathode is made of a combination of V2O5, P3HT (a semiconducting polymer) and reduced graphene oxide, giving a band arrangement that allows for the easy extraction of excited electrons. The V2O5 absorbs most light across the visible range, exciting electrons and generating electron–hole pairs. The excited electrons then move between the other materials, while the P3HT blocks the movement of the corresponding holes and prevents recombination. These holes then repel the Zn ions, expelling them from the cathode and recharging the system.

‘Directly recharging batteries without external solar cells can promote the overall efficiency and reduce the system cost,’ comments Yi-Chun Lu, who researches rechargeable batteries at the Chinese University of Hong Kong. ‘It is particularly impressive that they demonstrated fully functional photo-rechargeable Zn-ion batteries in a large pouch cell format, which supports its potential for practical application. However, future work in thermal management and photo-battery pack design will be important for these practical applications.’

The researchers are working to improve the device’s efficiency and on how they can apply these materials in practical off-grid environments.