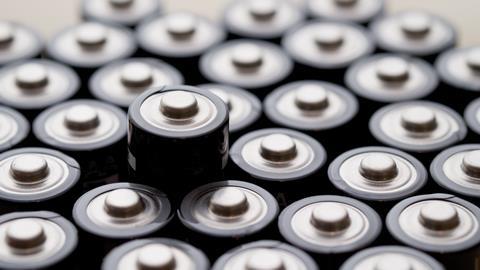 Scientists have designed a triangle-shaped molecule to make the first rechargeable aluminium battery that works with cations, getting one step closer to cheap and powerful batteries that could outperform lithium-ion systems.1

The battery – which can be recharged thousands of times – is the first to run on aluminium complex cations. This solves a conundrum in existing aluminium-ion systems: they work with complex anions and consume a lot of electrolyte.

Today, many portable devices are powered by lithium-ion batteries. But despite their popularity, such batteries are still expensive and may present safety issues. Aluminium devices are a promising alternative because the element – the anode material in such batteries – is the third most abundant in the Earth’s crust. It is not only cheap but also less reactive than lithium, which makes it safer. 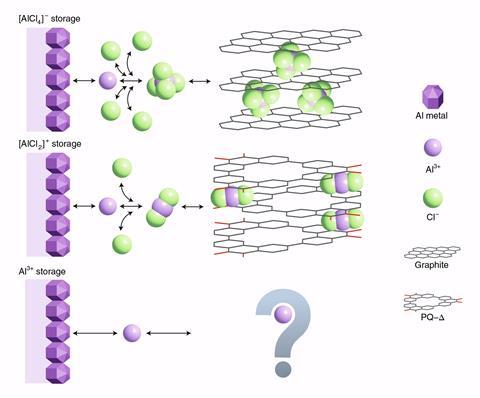 Each aluminium atom can release three electrons upon discharge, giving aluminium batteries a potentially high energy density. But Al3+ ions can interact with electrolyte and cathode, reducing the battery’s lifetime. In 2015, researchers developed a battery that instead stores chloroaluminate ions (AlCl4–).2 However, a large amount of electrolyte was required to sustain chloride ion supply and battery operation, so finding a host electrode that accommodates all these ion remains a challenge.

Researchers working with Jang Wook Choi at Seoul National University, Korea, and Nobel laureate Fraser Stoddart at Northwestern University, US, have now developed a cathode that can store AlCl2+ ions instead of AlCl4–. This means only two chloride ions per aluminium ion are required, which makes this battery less electrolyte-demanding. This is the first time a battery runs on aluminium complex cations, explains Choi.

Choi and his colleagues synthesised a redox-active triangular phenanthrenequinone-based macrocycle and used it to build the electrodes. ‘[The macrocycle] maintains a stable layered superstructure for the insertion and extraction of aluminium complex ions,’ says Dong Jun Kim, University of New South Wales, Australia, who also worked on the battery.

The material was tested in a two-electrode cell using an imidazolium chloride electrolyte and an aluminium anode. The new cathode showed a reversible capacity of 110mAh/g at a current rate of 0.1A/g, with almost 60% capacity retention after 5000 charge–discharge cycles.

’The use of abundant elements and demonstration of thousands of cycles shows that the system has some properties suitable for large-scale energy storage,’ says Doron Aurbach, an electrochemist at Bar-Ilan University, Israel. ‘My concern: The electrolyte solutions are based on ionic liquids, which are usually expensive.’ 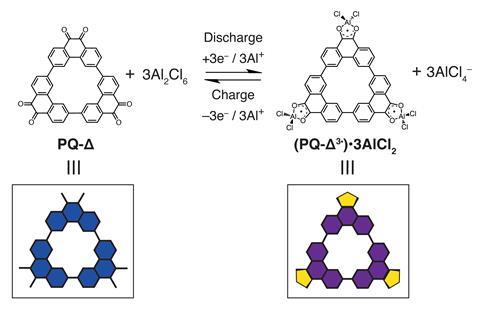 Yan Yao, who works on the development of energy materials at the University of Houston, US, says that the new results are a step in the right direction. ’This work marks an important transition from AlCl4- to AlCl2+ storage mode, halfway towards a true aluminium-ion battery where an Al3+ flow between cathode and anode takes place,’ he says.

To obtain a cathode with even better properties, the scientists blended the macrocycle with graphite flakes. ‘Thus, intrinsic shortcomings of organic molecules as electrode materials, such as low electronic conductivity and limited loading, can be greatly overcome,’ says Choi.

Although the results are promising, the researchers say it’s too early to compare their system with lithium-ion technology. ‘We are at the beginning of aluminium-ion battery research,’ says Kim. ‘Our results show promising battery performances, but we need to improve even more in every aspect, including specific capacity and areal loading weight.’

Yao agrees: ‘The aluminium–organic battery is still in its infancy compared to lithium-ion batteries.’ ‘Being a hybrid-ion device, its specific energy is still limited by the required amount of electrolyte during operation,’ he continues. ‘The cost and availability of current collectors and other cell components should be considered so that the low cost and abundance of aluminium can translate into real devices.’